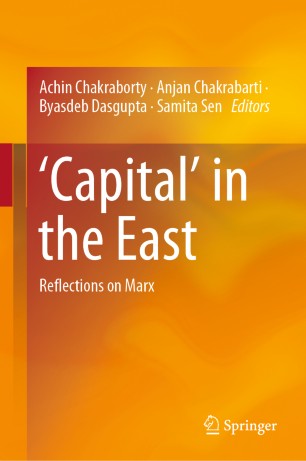 ‘Capital’ in the East

This book pursues a Marxist approach with an emphasis on class to reflect on Marx’s Capital in the context of the East. It critically reassesses some of the familiar concepts in Capital and teases out issues that are at its periphery. In various essays, it explores this borderland to promote new concepts and modes of analysing Marx’s treatise in the twenty-first century. Accordingly, it represents an advance in Marxian theory and politics.

Examining Marx’s Capital from the perspective and location of the East, the book focuses on many issues that are at the ‘borders’ of Capital, which is concerned principally on unpacking developed capitalism. New concepts are introduced and set in relation to those championed by Marx in order to advance our understanding of economy, capitalism, development and politics. In this regard, the book offers a reading of Capital that is distinct from conventional reflections on it in the Western world.

The scope is vast, covering much of the territory in Marx's Capital, as well as addressing a few new issues connected to Capital. The content is divided into the following sections: Reception of Capital in the East; Value, Commodity, Surplus Value and Capitalism; Population and Rent in Capital; and Issues Beyond Capital.