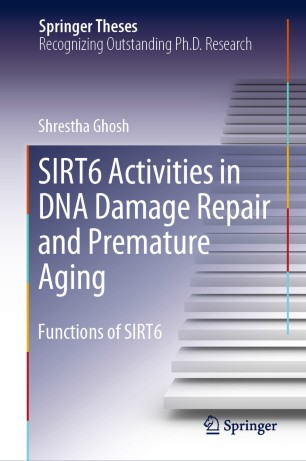 This book illustrates the activities of mammalian sirtuin SIRT6 in connection with DNA damage repair and premature aging. It mainly presents research on the nuclear lamin A, notably the upregulation of p53 and acetylation etc. Taken together, these studies reveal the various regulatory roles of SIRT6, which are of substantial biological relevance in DNA damage repair, aging and longevity, and can have significant implications in devising therapeutic strategies to combat age-associated pathologies. Given its scope, the book offers a valuable resource for students and researchers in the fields of genetics, cell biology, molecular biology etc.

Dr Shrestha Ghosh is currently a Postdoctoral Research Fellow at Dana Farber Cancer Institute, Harvard Medical School, USA. She earned her Bachelor’s Degree from the National Institute of Technology, Durgapur, India as a Gold medalist in 2011. She then moved to Hong Kong to pursue her PhD.

She began her work at the School of Biomedical Sciences, University of Hong Kong, as a research assistant to Prof. Zhongjun Zhou, who would later become her PhD advisor. Dr Ghosh completed her PhD in 2017. During her doctoral studies, she primarily focused on premature aging and DNA damage responses.

From 2012 to 2017, she contributed to one book chapter and seven research articles, including two as first author. During this period, she also mentored several summer interns and a final-year Bachelor student. She won the first runner-up and people’s choice award at a 3-minute Thesis competition hosted by the University of Hong Kong in 2017, and later represented HKU at the Asia Pacific 3-minute Thesis competition held at the University of Queensland, Australia. In the last year of her research in HKU, she received several accolades, including the Reaching Out Excellence award bestowed by the HKSAR government