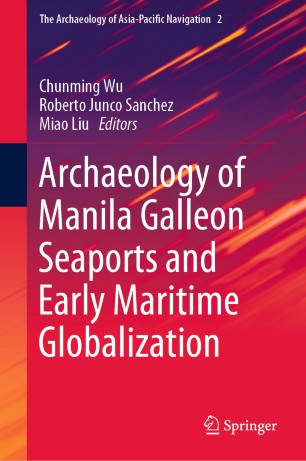 Part of the The Archaeology of Asia-Pacific Navigation book series (AAPN, volume 2)

This book focuses on the archaeological and historical research on the seaport heritage of galleon navigation in Asia-Pacific region. It reconstructs the Manila Galleons’ era of early maritime globalization, established and operated by Spanish navigators from the 16th to 19th centuries. The galleons sailed across the Pacific via the hub seaports and trade centers of Manila in the Philippines and Acapulco in Mexico, forming a prosperous sea route connecting eastern Asia and New Spain on the American continent for more than 250 years. This pioneering navigation of the pan-Pacific regions promoted early global maritime trade along the new Maritime Silk Road between the East and the West.
Written by archaeologists and cultural historians from America, Mexico, Japan, the Philippines, Mainland China, Hong Kong and Taiwan, it presents the latest investigations and research on the galleon-affiliated seaports, including Acapulco and San Blas in Mexico, Guam, Manila in Philippines, Yuegang (Crescent Harbor), Xiamen (Amoy), Keelung and Macao in China, Nagasaki in Japan.  This joint research sheds new light on the history of navigation and maritime trade between galleon-affiliated harbors; the origin, production, transport and trade of the galleon cargo; social cultural exchange along the new Maritime Silk Road in the pan-Pacific region; and the history of maritime globalization in last 500 years. It offers a new perspective on maritime archaeology and traces the different stages of the galleon trade and affiliated maritime history, including "Yuegang Outbound", "Manila Entrepotting" and "Bound for Acapulco", presenting a panoramagram of Spanish pan-Pacific trade and early maritime globalization.