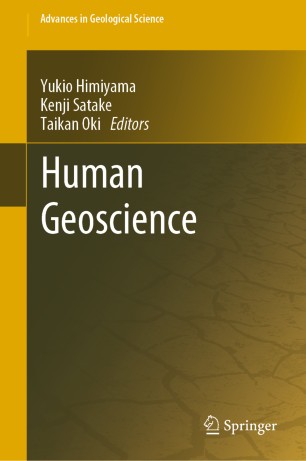 Part of the Advances in Geological Science book series (AGS)

This book is a product of the joint efforts of interdisciplinary academic fields under the integrative framework of human geoscience. Human geoscience is a new genre of geoscience concerned with the natural phenomena that occur on the surface of the Earth and their relations with human activities. It therefore has connections with many fields of geoscience, namely, physical geography, geomorphology, geology, soil science, sedimentology, seismology, volcanology, meteorology, climatology, oceanography, and hydrology. It also has strong links to the humanities, social sciences, agricultural sciences, and engineering related to disaster prevention or mitigation. All these disciplines are important fields for understanding disasters and global environmental problems and for evaluating the associated risks comprehensively, then proposing mitigation strategies.
The volume is designed for those who may not necessarily have a geoscience background but have broad scientific interest in understanding the causes, mechanisms, and consequences of geo-disasters and global environmental problems and wish to make the world more sustainable on that basis. The book consists of six parts: I. Introduction, II. Earth Surface Realms, III. Natural Resources and Society, IV. Natural Hazards and Society, V. Global Environmental Problems, and VI. Global Sustainability Programmes and Human Geoscience, which discusses the contribution of this field of science to a new comprehensive framework for global sustainability.

Yukio Himiyama is an emeritus professor of the Hokkaido University of Education, Japan. He taught at this university from 1980 until 2015 after receiving his MSc in physics at UCLA and Tohoku University, and his PhD in geography at King’s College London. With this background and in this vocational environment, he has written and edited numerous articles and books in geography and geography education, sustainability sciences and sustainability education, land use/cover change, disasters, lifelong learning, and other related fields. He has been active in Science Council of Japan and the Japan Geoscience Union for more than a decade, assuming several key posts, and has nurtured his broad interdisciplinary insight which helped him to develop a new academic discipline for sustainability such as human geoscience.  He is currently the president of the International Geographical Union (IGU).

Kenji Satake is a professor and the director of the Earthquake Research Institute, The University of Tokyo. His research interests are giant earthquakes and tsunamis in the world, for which he uses geophysical, geological, and historical approaches. He was the chair of the International Union of Geodesy and Geophysics (IUGG) Tsunami Commission from 2003 to 2011, during which period the 2004 Indian Ocean and 2011 Tohoku tsunamis occurred. He is a fellow of the American Geophysical Union and currently a vice president of the International Association of Seismology and the Earth’s Interior (IASPEI). He is the editor-in-chief of Geoscience Letters, the official journal of the Asia and Oceania Geosciences Society, for which he served as president from 2012 to 2014.

Professor Taikan Oki’s research specializes in global hydrology and the sustainability of world water resources, including virtual water trade and water footprints. He was one of the coordinating lead authors for the chapter “Freshwater Resources” in the Intergovernmental Panel on Climate Change (IPCC) Fifth Assessment Report (AR5). He obtained his BEng and PhD degrees at The University of Tokyo. He also received qualification as a weather forecaster. He became a professor at The University of Tokyo in 2006. He is the senior vice-rector of United Nations University and has been an assistant secretary-general at United Nations since 2016. He is the recipient of many awards, including the Biwako Prize for Ecology in 2011 and the Japan Academy Medal in 2008. He became the first Japanese American Geophysical Union Fellow in its Hydrology Section in 2014.