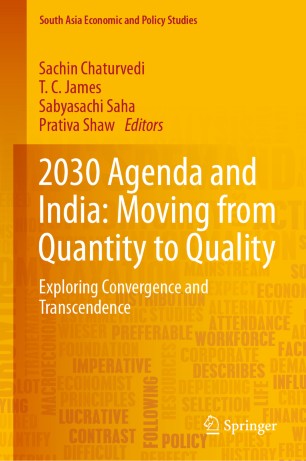 2030 Agenda and India: Moving from Quantity to Quality

The choice of topics, apart from their relevance for India, was guided by their importance in connection with multiple SDG goals. In addition to revealing the intricacies of systemic relationships and the dilemmas they create in policy choices, the book examines the role of actors and the critical importance of partnerships to help readers comprehend the breadth of diversities and inter-linkages involved. The roles of the central and state governments, the parliament and the state assemblies, the civil society, UN agencies and district-level authorities are separately explored in depth. Sharing valuable insights, the book encourages policymakers, practitioners and scholars to move towards a sustainable and equitable economy, and supports them in their efforts.

Prof Sachin Chaturvedi is Director General at the Research and Information System for Developing Countries (RIS), an independent policy research institute, based in New Delhi. He was a Global Justice Fellow at the MacMillan Center for International Affairs at Yale University. He is on the board of the Reserve Bank of India. His work chiefly focuses on issues related to development economics, largely focussing on trade, investment and technology connect within the framework of global governance and South-South Cooperation.  He has also worked on trade and innovation linkages with a special focus on the WTO. He has served as a Visiting Professor at Jawaharlal Nehru University (JNU) and has also worked as a Consultant to the UN Food and Agriculture Organization, World Bank, UN-ESCAP, UNESCO, OECD, and many other agencies. He has authored several books, edited four books, and published several research articles in various prestigious journals.

Prof TC James is a Visiting Fellow at the Research and Information System for Developing Countries (RIS), and President of NIPO, a non-profit Indian Intellectual Property Foundation. He is also a Member of the Speaker’s Research Initiative and Guest Faculty on Intellectual Property Rights (IPRs) at the Indian Law Institute, New Delhi, and Indian Academy of International Law and Diplomacy, New Delhi. He is a former Director (IPRs) of the Ministry of Commerce & Industry, Government of India and Member of the Academic Council, Shekhawati University, Sikar. He has served on Indian delegations to the WIPO and WTO and has been a Consultant (IPRs) to the FICCI and UNIDO. He has authored books and chapters in books on IP and also published many articles in several journals.

Dr Sabyasachi Saha is an Assistant Professor at the Research and Information System for Developing Countries (RIS), New Delhi. He specialises in economics of innovation, international trade and international development.  In the context of the SDGs, he has extensively worked on the scope of innovation; technology facilitation and transfer; industrial development; resource mobilisation and the role of the private sector.  He obtained his Ph.D., M.Phil. and M.A. in Economics from the Jawaharlal Nehru University (JNU), New Delhi at the Centre for International Trade and Development (CITD). As a Ph.D. scholar he received the WIPO Prize, a DAAD funded junior fellowship for research in Germany, and Government of India Travel Award. Previously, he has also worked with premier academic institutions and think tanks in India as senior member of the research staff. Recently, he contributed as a Member of T20 Japan Task Force on Trade, Investment, and Globalisation.

Ms Prativa Shaw is a member of the research faculty at the Research and Information System for Developing Countries (RIS), New Delhi. Her areas of research interest include the SDGs, innovation policy, international trade and regional cooperation. She has published and contributed to numerous research reports and working papers on the aforementioned themes. She has over 5 years of research experience and has previously been associated with Ministry of Finance, Government of India, as a Research Consultant under the Tax Administration Reform Commission. Very recently, she was chosen for the prestigious IDE-JETRO-IDEAS, Japan fellowship and completed her diploma in International Studies from IDE-JETRO, Japan. She holds a Master’s degree in Economics from the Jadavpur University, Kolkata.