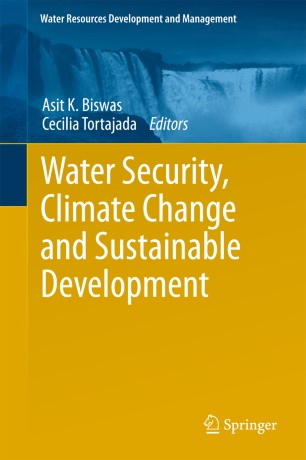 This book pursues a comprehensive approach so as to arrive at a better understanding of the implications of climate change on sustainable development, focusing on the perspective of water. Climate change is one of today’s most pressing global issues and will become increasingly important in the decades to come, as societies will feel its pervasive impacts in many aspects of their lives. Given that the majority of these climate change impacts will be felt through the medium of water, the book explores the interrelationships and inter-linkages between water, climate change and sustainable development.

Prof. Asit K. Biswas is the founder of the Third World Centre for Water Management in Mexico, and currently is the Distinguished Visiting Professor at the Lee Kuan Yew School for Public Policy in Singapore, University of Wuhan, China, and Indian Institute of Technology, Bhubaneswar, India. Formerly a Professor in UK, Canada and Sweden, he was a member of the World Commission on Water. He has been a senior advisor to 19 governments, six Heads of the United Agencies, Secretary General of OECD and also to many other major international and national organisations. He is a Past President of the International Water Resources Association, and has held important positions in several major international water and environment‐related professional associations. Prof. Biswas is the founder of the International Journal of Water Resources Development and has been its Editor‐in‐Chief for the past 28 years. He has been the author or editor of 81 books (6 more are now under publication) and published over 680 scientific and technical papers. His work has now been translated into 37 languages. Among his numerous prizes are the two highest awards of the International Water Resources Association (Crystal Drop and Millennium Awards), Walter Huber Award of the American Society of Civil Engineering and Honorary Degree of Doctor of Technology from University of Lund, Sweden, and Honorary Degrees of Doctor of Science from University of Strathclyde, Helsinki University of Technology, and Indian Institute of Technology. Prof. Biswas received the Stockholm Water Prize in 2006 for “his outstanding and multi‐faceted contributions to global water resource issues”, as well as the Man of the Year Award from Prime Minister Harper of Canada, and the Aragon Environment Prize of Spain. In 2012, he was named a “Water Hero of the World” by the Impeller Magazine, and also as one of the 10 thought‐leaders of the world in water by Reuters. He is a member of the Global Agenda Council on Water Security of the World Economic Forum. He is regular contributor to many national and international newspapers on resource and development related issues and also is a television commentator in three continents.
Dr. Cecilia Tortajada is President of the International Water Resources Association; Scientific Director of the International Centre on Water and Environment, Zaragoza, Spain; former Visiting Professor of the Lee Kuan Yew School for Public Policy, Singapore; and Vice President of the Third World Centre for Water Management. She has been an advisor to major international institutions like FAO, UNDP, CDG, InWEnt, and the governments of Cameroon, India, Turkey, and Republic of Congo on various aspects of water resources and environmental management and governance-related issues. She is currently working on formulation of national and international policies for water governance; management of future global environmental and water-related issues; development of innovative approaches for poverty alleviation through regional development; and capacity building in the water sector. She is the Editor of the International Journal of Water Resources Development, and member of the Editorial Board of the Journal of Natural Resources Policy Research.