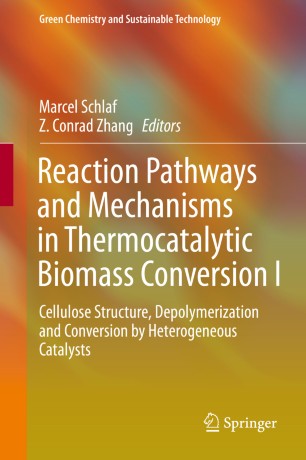 Reaction Pathways and Mechanisms in Thermocatalytic Biomass Conversion I

Volume I mainly focuses on the current understanding of the reaction pathways and mechanisms involved in several important catalytic conversions of cellulose and carbohydrates. It starts with nanoscale illustrations of biomass structures and describes various reactions including cellulose depolymerization to sugars, catalytic aldose-ketose isomerization and dehydration, selective oxidation, hydrogenolysis of cellulose and sugars, and the conversion of short carbohydrates. The specificity and function of different catalysts and reaction media in relation to the catalytic performances for these reactions are discussed with significant mechanistic details.

Marcel Schlaf, PhD, is a Professor at the Department of Chemistry, University of Guelph, Canada.

Z. Conrad Zhang, PhD, is a Professor at the Dalian Institute of Chemical Physics, Chinese Academy of Sciences, China.

Prof. Marcel Schlaf graduated as a Diplom-Chemiker from the Bayerische-Julius-Maximilian Universität in Würzburg, Bavaria in 1992. After obtaining a Ph.D. in Inorganic Chemistry from the University of Toronto in 1996, he was an NSERC post-doctoral fellow at the University of Ottawa and at Brookhaven National Laboratory, Long Island, NY. He joined the Department of Chemistry at the University of Guelph in 1999 where he was promoted to the rank of associate professor in 2004 and full professor in 2011. In 1995 and 2006 he was a visiting researcher at Los Alamos National Laboratory, NM and in 2009 a visiting faculty at Peking University and Dalian University of Technology in China. In 2010 he was appointed Adjunct Research Professor at the Department of Chemical and Biochemical Engineering, Faculty of Engineering, University of Western Ontario and the Institute for Chemicals and Fuels from Alternative Resources (ICFAR). His research interests lie in the development of new homogeneous catalysts and processes for the selective deoxygenation of sugars, sugar alcohols and triglycerides to petrochemicals or monomers and the upgrading of pyrolysis bio-oil, as obtained from non-food ligno-cellulosic biomass, to usable fuel using heterogeneous catalysts, notably non-toxic sacrificial catalysts derived from Bauxite mining waste (Red Mud). He has published more than 40 papers and holds 3 patents.

Professor Z. Conrad Zhang received his B.S. in Chemistry from Lanzhou University, China in 1982 and his Ph.D. in Chemistry from the University of Connecticut in 1988. He carried postdoctoral research at Northwestern University on zeolite catalysts and zeolite supported metal catalysts. He later became a research assistant professor at the Catalysis Center of Northwestern University. He started his industrial research career in 1992 with Johnson Matthey, and shortly after joined Akzo Nobel’s Central Research as a senior chemist. He became a senior scientist at Akzo Nobel and established a multiple-disciplinary research group at the corporate level of Akzo Nobel Chemicals. In 2005, Professor Zhang joined the Pacific Northwest National Lab (PNNL) as a Chief Scientist. He led his research group pioneered the research in the conversion of glucose and cellulose to 5-hydroxymethylfurfural. In 2008, Professor Zhang joined KiOR Inc. as a member of the start-up management team at the position of the Director of Science and R&D of KiOR Inc. Professor Zhang Joined the Dalian Institute of Chemical Physics as a “Thousand Talent Program” full professor since 2013. His research is focused on the conversion of biomass to bio-fuels and bio-chemicals. Dr. Zhang has 90 publications and over 35 patents.