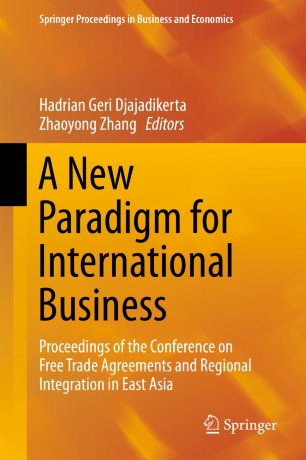 A New Paradigm for International Business

This book offers a collection of studies on regional integration and the dynamic business environment in East Asia. The papers included, originally presented at the 2014 Asia Pacific Business Conference on "Free Trade Agreements and Regional Integration in East Asia," examine the challenges and dynamics in the increasingly integrated East Asian markets and outline a new paradigm for doing international business in the region. The papers address diverse areas related to regional integration, financial markets, investment, trade and capital flow, sustainability, accounting and auditing issues, exchange rates, strategies and the regional business environment. The book provides a valuable resource for practitioners, policy-makers and students who are interested in understanding the vibrant aspects of business in today’s East Asia.

Hadrian Geri Djajadikerta is currently Associate Head of School of Business, Associate Professor in Accounting and Head of the Asian Business and Organisational Research Group (ABORG) at Edith Cowan University in Australia. He has had a widespread career, previously having held academic positions at University of New South Wales, Lincoln University and University of Technology Sydney. He holds a Ph.D. in Accounting, a Master of Business Administration (MBA), and a Master of Science in Industrial Engineering and Management. Hadrian has also held international management and consulting positions outside university in both the private and public sectors including small businesses, large state-owned enterprises and government ministries. Hadrian has published extensively in the areas of accounting, management and education and has supervised many doctoral candidates to completion. Hadrian is also a Director at the Indonesia Institute, a Western Australian based non-governmental organisation that is active in promoting Indonesia-Australia relations.

Zhaoyong Zhang, obtained his Ph.D. in Economics from the Catholic University of Leuven (Belgium) in 1991, currently is an Associate Professor of Economics & Finance and Head of the Asian Business and Organisational Research Group (ABORG) in the School of Business at Edith Cowan University (ECU) in Australia. Previously, he was Professor of Economics & Finance at NUCB Graduate School of Commerce and Business in Japan in 2004-2006, and Associate Professor and Director of CSTE at National University of Singapore (NUS) in 1991-2004. He held several visiting professor positions at ECU, Yokohama National University (YNU), ICSEAD (Japan) and KIEP (Korea) and was also a visiting fellow/adjunct (Associate) Professor at University of Western Australia, University of South Australia, University of Macau as well as several universities in China. He also held several consulting positions with international institutions including OECD, IDRC and Hanns Seidel Foundation (Germany). He has been included in the 2000 Outstanding Intellectuals in the 21st Century by Cambridge International Biographical Centre in 2008; and also in Who’s Who in the World in 2007-2012. His major research interests are International Trade and Finance, East Asian Financial Markets, East Asia Monetary and Economic Integration, Foreign Exchange Policy and Reform in China. Zhaoyong has published one book manuscript, 34 chapters in book and 52 articles in international journals, as well as edited and co-edited 4 special issues for the international journals including Papers in Regional Science in 2003 and The World Economy in 2006 and 2012, respectively.