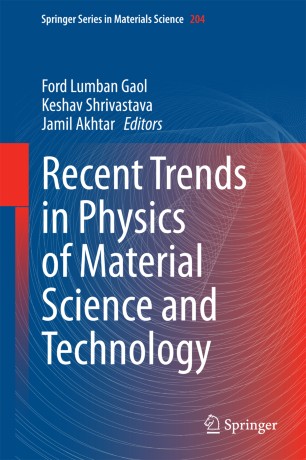 Recent Trends in Physics of Material Science and Technology

This book discusses in detail the recent trends in Computational Physics, Nano-physics and Devices Technology. Numerous modern devices with very high accuracy, are explored In conditions such as longevity and extended possibilities to work in wide temperature and pressure ranges, aggressive media, etc. This edited volume presents 32 selected papers  of the 2013 International Conference on Science & Engineering in Mathematics, Chemistry and Physics . The book is divided into three  scientific Sections: (i) Computational Physics, (ii) Nanophysics and Technology, (iii) Devices and Systems
and is addressed to Professors, post-graduate students, scientists and engineers taking part in R&D of nano-materials, ferro-piezoelectrics, computational Physics and devices system, and also different devices based on broad applications in different areas of modern science and technology.

Dr. Ford Lumban Gaol received his PhD in Computer Science from the University of Indonesia, Indonesia in 2009. He is currently an Associate Professor in the department of Informatics Engineering and Information System, at Bina Nusantara University, Indonesia. He is also the Chair of PhD Program and Research Interest Group Leader of Advance Systems in Computational Intelligence & Knowledge Engineering. Dr Ford is the Vice Chair of IEEE Indonesia. He is the Chair SERSC: Science & Engineering Research Support Society Indonesia Section. Dr Ford is member of Indonesian Mathematical Society (IndoMS), The Association for Computing Machinery (ACM) Professional, The International Association of Engineers (IAENG) and the Indonesia Society for Bioinformatics.

Dr. Keshav N. Shrivastava, received his Ph.D. from the Indian Institute of Technology Kanpur. He is currently a Professor at the School of Physics at the University of Malaya. Previously he worked at the Clark University during 1966-68, at the Harvard University during the summer of 1968, at the Montana State University during 1968-69, and at the University of Nottingham during 1969-70. His research interests include electron spin resonance, spin-phonon interaction, relaxation, Mossbauer effect, exchange interaction, superconductivity and the quantum Hall effect. He has published more than 230 journal articles. Prof. Shrivastava is a Fellow of the Institute of Physics London, Fellow of the National Academy of Sciences India and member of the American Physical Society.

Dr. Jamil Akhtar is the Chief Scientist at CSIR-CEERI, Pilani, India, and heads the Sensors and Nano-Technology Group. He is associated with AcSIR (Academy of Scientific and Innovative Research, India) as Professor and coordinates courses in Advanced Semiconductor Electronics and teaches semiconductor Devices Physics. He holds four patents to his credit and more than forty journal articles. He is a life member of Indian Physics Association, Indian Nuclear Society, Instrument Society of India and IETE, India. He is also a member of IEEE, USA.