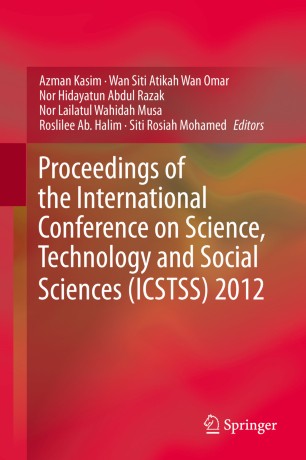 Proceedings of the International Conference on Science, Technology and Social Sciences (ICSTSS) 2012

This biannual conference in Pahang, Malaysia, is a clearing house for many of the latest research findings in a highly multidisciplinary field. The contributions span a host of academic disciplines which are themselves rapidly evolving, making this collection of 90 selected papers an invaluable snapshot of an arena of pure and applied science that produces many versatile innovations. The book covers a multitude of topics ranging from the sciences (pure and applied) to technology (computing and engineering), and on to social science disciplines such as business, education, and linguistics.

The papers have been carefully chosen to represent the leading edge of the current research effort, and come from individuals and teams working right around the globe. They are a trusted point of reference for academicians and students intending to pursue higher-order research projects in relevant fields, and form a major contribution to the international exchange of ideas and strategies in the various technological and social science disciplines. It is the sheer scope of this volume that ensures its relevance in a scientific climate with a marked trend towards disciplinary synthesis.

Dr Azman Kasim obtained his Ph.D in amorphous lasing materials from Universiti Teknologi Malaysia (UTM), Johor in 2010. In 2000, he obtained his M.Sc in Physics Ultrasonic and in 1995 he completed his degree in physics from Universiti Putra Malaysia (UPM). Currently, he is a senior lecturer at Universiti Teknologi MARA, Pahang, Malaysia. He has worked at UiTM since 2000 and has been appointed the Academic Publications Coordinator (JAPENA). His appointment as the Physics Association advisor has ensured active involvement with undergraduate students’ affairs and development projects. He has supervised M.Sc and Ph.D students to carry out research activities. In research and publications, Dr Azman has collectively published research papers related to his field of studies in refereed journals both locally and internationally. He has also been awarded grants by the Malaysia government (Ministry of Education) to carry out research works related to his field of studies in collaboration with other Malaysian higher educational institutions. Dr Azman has been enrolled as a life member of the Malaysia Association of Solid State (MASS), Malaysia, as well as the member of Glass Society, UK, since 2008.

Wan Siti Atikah has been working at Universiti Teknologi MARA (UiTM), Pahang, as a biology lecturer since 2006. She obtained her first and second degrees from Universiti Putra Malaysia.  She was granted BSc. in Bioindustry (Majoring in Microbes and Bioprocess Technology) and MSc. in Fermentation Technology in 2003 and 2009, respectively.  She has a few years in teaching pre-university, diploma, and first degree levels.  She is also involved in curriculum design for a few programs offered in UiTM. She has supervised undergraduate projects and MSc students in her field.  She has also been awarded grants from Ministry of Education, Malaysia, as funds for her research activities. Her works have been published in local and international proceedings.  She is also a life member of Malaysian Society for Microbiology (MSM) since 2012.

Nor Hidayatun Abdul Razak obtained her Masters in Electronic Marketing and Information Management from the University of Western Australia (UWA), Australia in 2004. In 1996, she completed her degree in Marketing and Management (BBA) from the Northwood University (NU - Michigan), USA. She worked for Sibexlink Sdn Bhd in 1997 as Product Executive and was promoted to Senior Executive in year 2000. She was then involved with United Multimedia Sdn Bhd as Instructional Designer (2001 to 2003), Content Solution Sdn Bhd as a Senior Instructional Designer (2004 to 2005) and Malaysian Institute of Management (MIN) as a manager (2006 to 2007). She joined Universiti Teknologi MARA Pahang (UiTM) in 2007 where she spent 7 years as a lecturer and produced several articles on orang asli agropreneurship and halal issues. She is now pursuing her PhD in Halal Marketing at University of Canterbury, New Zealand.

Roslilee Ab.Halim has been working in Universiti Teknologi MARA (Pahang), Malaysia since 2005. Currently, she is a senior lecturer at the university and has held the position of Economics Coordinator since 2011. She obtained her Master of Economics from Universiti Kebangsaan Malaysia (UKM), Selangor in 2005 and completed her first degree in Economics from the same university in 2000. She is actively involved in writing articles for national and international proceedings, refereed journals, and other publications. Her research interests include Islamic economics, International Economics, Halal market, Consumer behavior, e-commerce, Childcare and Female labor supply issues. She has also been awarded grants by the Malaysia government (Ministry of Education) and Pahang state government to carry out research works related to her field of studies.

Siti Rosiah Mohamed obtained her M.Sc in Management Mathematics from Universiti Kebangsaan Malaysia (UKM), in 2008. In 2006, she completed her first degree in Computational Mathematics from University College of Science and Technology Malaysia (KUSTEM). Currently, she is a lecturer at Universiti Teknologi MARA, Pahang, Malaysia. She has worked at UiTM since 2008 and has been appointed as the Type Setting Editor (JAPENA). She has published research papers related to her field of studies both locally and internationally.