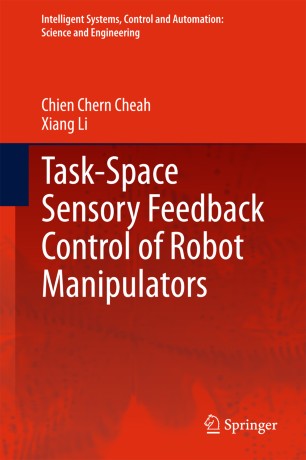 This book presents recent advances in robot control theory on task space sensory feedback control of robot manipulators. By using sensory feedback information, the robot control systems are robust to various uncertainties in modelling and calibration errors of the sensors. Several sensory task space control methods that do not require exact knowledge of either kinematics or dynamics of robots, are presented. Some useful methods such as approximate Jacobian control, adaptive Jacobian control, region control and multiple task space regional feedback are included. These formulations and methods give robots a high degree of flexibility in dealing with unforeseen changes and uncertainties in its kinematics and dynamics, which is similar to human reaching movements and tool manipulation. It also leads to the solution of several long-standing problems and open issues in robot control, such as force control with constraint uncertainty, control of multi-fingered robot hand with uncertain contact points, singularity issue of Jacobian matrix, global task-space control, which are also presented in this book. The target audience for this book includes scientists, engineers and practitioners involved in the field of robot control theory.

Chien Chern CHEAH was born in Singapore. He received B.Eng. degree in Electrical Engineering from National University of Singapore in 1990, M.Eng. and Ph.D. degrees in Electrical Engineering, both from Nanyang Technological University, Singapore, in 1993 and 1996, respectively. From 1990 to 1991, he worked as a design engineer in Chartered Electronics Industries, Singapore. He was a research fellow in the Department of Robotics, Ritsumeikan University, Japan from 1996 to 1998. He joined the School of Electrical and Electronic Engineering, Nanyang Technological University as an assistant professor in 1998. Since 2003, he has been an associate professor in Nanyang Technological University. In November 2002, he received the oversea attachment fellowship from the Agency for Science, Technology and Research (A*STAR), Singapore to visit the Nonlinear Systems laboratory, Massachusetts Institute of Technology. He serves as an associate editor for IEEE Transactions on Robotics, Automatica and Asian Journal of Control.

Xiang LI received the Bachelor, Master and PhD degrees from Beijing Institute of Technology, and Nanyang Technological University in 2006, 2008, and 2013 respectively. He is currently working as a Research Associate at the Intelligent Robotics Lab, Nanyang Technological University, Singapore. He has served as a reviewer for several international journals including Automatica, IEEE Transactions on Mechatronics, IEEE Transactions on Robotics, and Asian Journal of Control. He is an editor of Journal of Control and Systems Engineering. His current research interests include robot control, visual servoing, and cell manipulation.