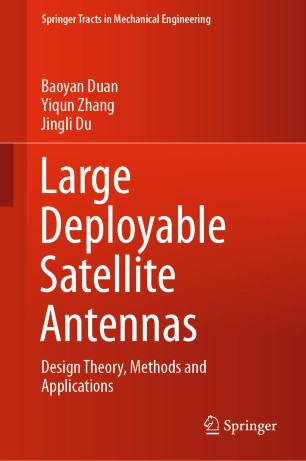 This book discusses the innovative design, cable-net design and analysis, control, deployment, development and applications of large space-deployable antennas. Drawing on the authors’ own work in this field, it describes and analyzes various typical deployable antennas, membrane antennas and super-large space-assembled antennas, while chiefly focusing on mesh antennas due to their wide range of applications. It also investigates forming–finding design and the analysis of cable-truss structures for high-precision reflector antennas, as well as deployment process control and deployment reliability based on flexible multibody dynamic analysis. The book covers not only mechanical structure performance, but also electromagnetic performance realization and stability. Lastly, it proposes an electrical equivalent method for mesh reflector antennas and a coupling model for the structural displacement field and electrostatic field. Given the nature of its content, the book is intended for researchers, graduate students and engineers in the field of space antennas.

Baoyan Duan is an Academician of the Chinese Academy of Engineering and President of Xidian University from April 2002 to July 2012. He is currently a Full Professor at the School of Electromechanical Engineering at Xidian University where he founded the research institute on mechatronics about electronic equipment structural design. His current research interests include mechatronics, electromechanical coupling theory and application, engineering structural optimization and CAD/CAE. He published 5 books and authored or co-authored over 200 papers and was invited to give presentations at international conferences and symposia. He is a Fellow of IET and Chinese Institute of Electronics (CIE) and member of the International Association for Computational Mechanics (IACM) and International Society for Structural and Multidisciplinary Optimization (ISSMO). He is the Chairman of the Electromechanical Engineering Society of China.

Yiqun Zhang received the Ph.D. degree from Xidian University, China, in 2013. He is currently an Associate Professor at the School of Mechanical and Electrical Engineering, Xidian University, China. His research interests include analysis and design of large space deployable structure/mechanism. He led or participated in more than 10 national key projects, and the achievements won the second prize of National Science and Technology Progress Award.

Jingli Du received the Ph.D. degree from Xidian University, China, in 2006. He is a Professor and Ph.D. candidate supervisor at the School of Mechanical and Electrical Engineering, Xidian University, China. From 2012 to 2013, he worked as a Visiting Scholar at the University of Delaware University and Columbia University. His research interests include dynamic analysis and deployment process control of space flexible structure; static and dynamic analysis of nonlinear structure. He led or participated in more than 10 national key projects, and the achievements won the second prize of National Science and Technology Progress Award.