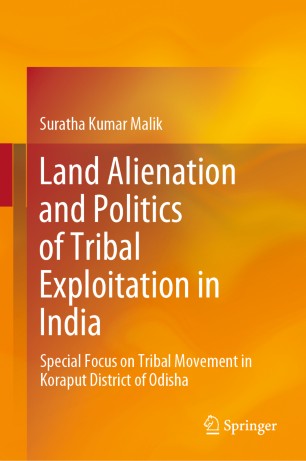 Land Alienation and Politics of Tribal Exploitation in India

Special Focus on Tribal Movement in Koraput District of Odisha

This book explores tribal land alienation problems in India and tribal agitation against land encroachment and alienation. It discusses India’s tribal land problem and explains how despite legislation to protect tribal lands, the problem has not been resolved since neither the letter nor the spirit of the law has been implemented. Due to continuous land encroachment and alienation by outsiders, the negligence of the revenue administration and the apathy of the central and state government, the situation concerning tribal land in the country have became precarious.
In this context, the book highlights the process of land estrangement among the tribes and the related movements, focusing on the Narayanpatna land movement in the Koraput district of Odisha. It argues that land remains a central issue that is extremely important for tribes as it directly affects their life, livelihood, freedom and development, and that the cultural attachment of tribes and their views regarding the idea of ‘place’ (land) furnishes crucial perspectives in understanding the politics of collective resistance. It also discusses the politicization of group identity and material interest against the outside authority as the basis of the unrest among the tribes, and when the grudges of the people are hardened due to insensitivity and tyranny, the extent of tribal resistance escalates, leading to conflict between the state and its own people. Given its scope, this book is a valuable resource for students and research scholars, as well as for policymakers and anyone interested in Indian democracy and development in general, and tribal problems, issues and politics in particular.