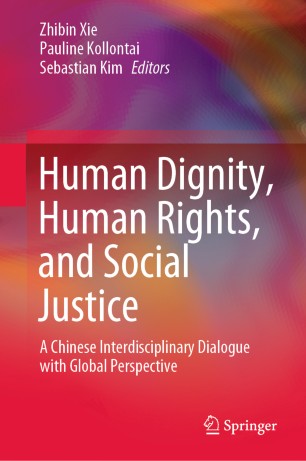 This book explores human dignity, human rights and social justice based on a Chinese interdisciplinary dialogue and global perspectives.

In the Chinese and other global contexts today, social justice has been a significant topic among many disciplines and we believe it is an appropriate topic for philosophers, theologians, legal scholars, and social scientists to sit together, discuss, enrich each other, and then deepen our understanding of the topic. Many of them are concerned with the conjuncture between social justice, human rights, and human dignity. The questions this volume asks are: what’s the place of human rights in social justice? How is human dignity important in the discourse on human rights? And, through these inquiries, we ask further: how is possible to achieve humanist justice? This volume presents the significance, challenges, and constraints of human dignity in human rights and social justice and addresses the questions through philosophical, theological, sociological, political, and legal perspectives and these are placed in dialogue between the Chinese and other global settings. We are concerned with the norms regarding human dignity, human rights and social justice while we take seriously into account their practice.

This volume consists of two main sections. The first section examines Chinese perspectives on human rights and social justice, in which both from Confucianism and Christianity are considered and the issues such as patriotism, religious freedom, petition, social protest, the rights of marginalized people, and sexual violence are studied.  The second section presents the perspectives of Christian public theologians in the global contexts. They examine the influence of Christian thought and practice in the issues of human rights and social justice descriptively and prescriptively and address issues such as religious laws and rights, diaconia, majoritarianism, general equality, social-economic disparities, and climate justice from global perspectives including in the contexts of America, Australia, Israel and Europe.

With contributions by experts from mainland China, Hong Kong, South Korea, Australia, New Zealand, the UK, USA and Norway, the book provides valuable cross-cultural and interdisciplinary insights and perspectives. As such it will appeal to political and religious leaders and practitioners, particularly those working in socially engaged religious and civil organizations in various geopolitical contexts, including the Korean Peninsula and Japan.

Zhibin Xie is Professor of Philosophy at Tongji University, Shanghai, P. R. China. He is a research fellow of the Institute of Sino-Christian Studies (Hong Kong), an honorary research associate of the Center for Christian Studies at The Chinese University of Hong Kong and a member of the Center of Theological Inquiry in Princeton. His research interests include Christian philosophy and ethics, public theology, religion and politics in China. His major publications include Religious Diversity and Public Religion in China (in English, Ashgate, 2006), Public Theology and Globalization: A Study in Max Stackhouse's Christian Ethics (in Chinese, Religious Culture Press, 2008), and Why Public? How Theological? A Retrospect and Prospect for Sino-Christian Public Theology (in Chinese, The Chinese University of Hong Kong, 2016). He has presented at various international conferences including the UK, USA, Germany and South Africa.

Pauline Kollontai is Professor of Higher Education in Theology and Religious Studies, and she is Director for the Centre for Religion in Society at York St John University. Prof. Kollontai worked previously at the University of Leeds in the School of Adult Education and at the University of Bradford in the Department of Peace Studies. Her academic qualifications are in the disciplines of Peace Studies and Theology and Religious Studies. Her research focuses on religions and peace-building; religion and social justice; religion, democracy and minority rights. Prof. Kollontai has been co-editor of a number of books which include Community Identity: Dynamics of Religion in Context (T&T Clark, 2007); Peace and Reconciliation: In Search of Shared Identity (Ashgate, 2008); Religion Creating Cultures of Peace, Vols, II & III (Nanumsa 2012); Mediating Peace: Reconciliation through Visual Art, Music and Film, (Cambridge Scholars Press 2015); Who is My Neighbour? Crossing Boundaries of Prejudice and Distrust, (Jessica Kingsley Publishing, 2017). She regularly presents at national and international conferences, consultations and symposiums. Since 2008 Prof. Kollontai has also taught at Meijii University Tokyo; Presbyterian University and Theological Seminary in Seoul, South Korea; Kaye Academic College of Higher Education, Be'er Sheva, Israel. She has recently been appointed to be a Resident Visiting Research Scholar in 2019 at the Centre of Theological Inquiry, Princeton, USA, working alongside other international scholars on the issues of religion and violence.

Sebastian Kim is Professor of Theology and Public Life and Assistant Provost for the Korean Studies Centre at Fuller Theological Seminary. He joined Fuller Seminary faculty in 2017, coming from York St John University in the UK where he held the Chair in Theology and Public Life in the School of Humanities, Religion and Philosophy for 12 years. Prior to joining York St John University, he was Director of the Christianity in Asia project and taught world Christianity in the Faculty of Divinity at the University of Cambridge. He also taught at Union Biblical Seminary in India and was Interim Director of the Henry Martyn Centre and Henry Martyn Lecturer at the Cambridge Theological Federation.

“I believe that the book should be congratulated on its success. This work provides insights and resources with which any interlocutor in a dialogue on Christianity, Confucianism or sociopolitical theory would be better equipped. … Human Dignity, Human Rights, and Social Justice provides valuable and timely contributions to these dialogues, for which it is to be highly commended.” (G. P. Marcar, International Journal of Public Theology, Vol. 15 (1), 2021)