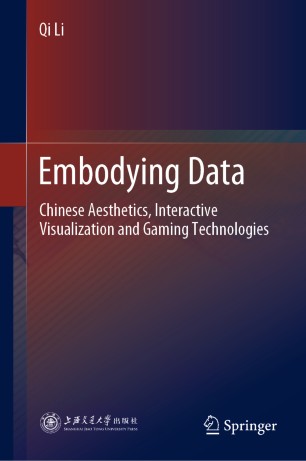 This book investigates a new interactive data visualisation concept that employs traditional Chinese aesthetics as a basis for exploring contemporary digital technological contexts. It outlines the aesthetic approach, which draws on non-Western aesthetic concepts, specifically the Yijing and Taoist cosmological principles, and discusses the development of data-based digital practices within a theoretical framework that combines traditional Taoist ideas with the digital humanities.
The book also offers a critique of the Western aesthetics underpinning data visualisation, in particular the Kantian sublime, which prioritises the experience of power over the natural world viewed at a distance. Taoist philosophy, in contrast, highlights the integration of the surface of the body and the surface of nature as a Taoist body, rather than promoting an opposition of mind and body. The book then explores the transformational potential between the human body and technology, particularly in creating an aesthetic approach spanning traditional Chinese aesthetics and gesture-based technology.
Representing a valuable contribution to the digital humanities, the book helps readers understand data-based artistic practices, while also bringing the ideas of traditional Chinese aesthetics to Western audiences. In addition, it will be of interest to practitioners in the fields of digital art and data visualisation seeking new models.

Qi Li is a scholar, artist, and designer who has lectured at universities in China and New Zealand. Li obtained his Ph.D. degree from Edith Cowan University in Perth, Australia. He is currently a lecturer in School of Art and Design in Shanghai University of Engineering Science and a senior research fellow in Tongji University. His research examines aesthetic approaches to data visualisation through the combination of gaming technology and traditional Chinese philosophies. He is interested in how digital technologies enhance creativity and artistic practices. Li has exhibited his work internationally in England, Australia, New Zealand, and China. In addition to authoring the book Interpretation of Online Gaming, he has published papers on the application of traditional Chinese aesthetics to data visualisation and environmental art in the journals Environmental Values and Humanities and Technology and also a paper published in Journal of Visual Communication. Li’s recent work on design theory has been published as a book chapter in Southeast Asian Ecocriticism: Theories, Practices, Prospects (Lanham, MD: Lexington, 2017).