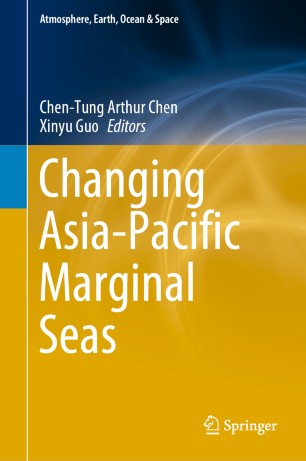 This book discusses temporal changes in six Asia-Pacific marginal seas and two west boundary currents in the Northwest Pacific. Covering time scales varying from years to decades, it provides a comprehensive review of the long-term changes in various physical variables, including sea level, sea surface temperature, water mass index, current and transport, as well as local issues such as sea ice and tidal mixing, and the processes and dynamics that govern them. The book also examines biogeochemical variables, such as nutrients, oxygen, pH, water transparency, ocean acidification, eutrophication and productivity, and explores future trends.

Offering a holistic view of the changes that have occurred in the Asia-Pacific marginal seas and those that are likely to occur in the future, this book will appeal to readers from all fields of oceanography.

Chen-Tung Arthur Chen has been a Professor of the Department of Oceanography since 1985. He has sat on numerous international committees, including the International Geoshpere-Bioshpere Programme(vice chair between 2009-2015), the IGBP/IHDP/WCRP/DIVERSITAS GCP, MAIRS, SCOR and WOCE. He also served as one of the executives of the JGOFS SSC between 1992–1995. Prior to that, he had helped to form the Joint JGOFS/LOICZ Marginal Seas Task Team in 1991, and served as its chairman until 1995. Prof. Chen is an associate editor of Mar. Chem. (since 1993), Cont. Shelf Res. (Since Oct. 2016), Acta Oceanol. Sin. (Since Oct. 2016), and an editorial board member of J. Marine Syst. (since 2001), Acta Oceanol. Sin. (2004 – Sept. 2016) and Cont. Shelf Res. (2007 – Sept. 2016). He also served as an editor of the J. Oceanogr. between 1998 and 2010. Prof. Chen's specialty is on the nutrients and carbon cycle in the oceans, ocean acidification (including hydrothermal systems), global change (including paleoclimates) and sediment heavy metals. His recent work is across disciplines toward integrated Earth System science on the regional to global scales. Besides having 400 of his own scientific papers published, he was awarded the highly-coveted 5M¥ Biwako Prize for Ecology from Japan in 1997 and is a Chair Professor of the NSYSU since 2006.

Xinyu Guo has been a professor of Center for Marine Environmental Studies, Ehime University since 2014. He mainly studies circulations and nutrient transport in the Kuroshio and the adjacent shelf seas using numerical models and historical data analysis. He has published more than 100 papers on these topics. He served as an editor for Journal of Oceanography from 2006 to 2014.