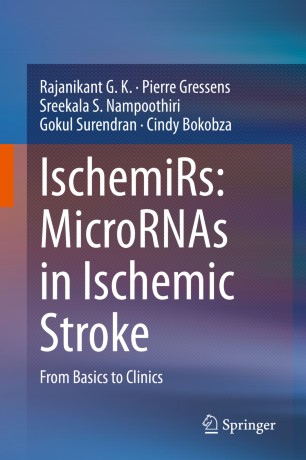 From Basics to Clinics

There has been an enormous increase in information relating to microRNA (miRNA) and its strategic role in numerous diseases. This book reviews the emerging role of microRNAs in cerebral ischemia, providing comprehensive details of the links between this small RNA molecule and ischemic stroke, the more prevalent of the two main types of stroke. The chapters address questions relating to microRNA’s function in various pathological features of stroke, like oxidative stress, excitotoxicity and cell death, as well as its role as a biomarker and diagnostic agent, and the current therapeutic interventions. Further, the book highlights the latest research on how miRNAs contribute to neuroregeneration following stroke, discussing the myriad computational tools and databases used in miRNA research, and decsribes how how miRNA modulates other cerebrovascular diseases. The book concludes with fresh insights into the effect of long non-coding RNA in cerebral ischemia.

Dr Rajanikant G. K. is currently working as a Professor at the School of Biotechnology, and served as the Coordinator of DBT - Bioinformatics Infrastructure Facility at National Institute of Technology Calicut, Calicut, India. Having done his Ph. D. in Radiation Biology & Toxicology from Division of Radiobiology & Toxicology, Manipal University, Manipal, India, he was also awarded a Senior Research Fellowship from Indian Council of Medical Research, Government of India, New Delhi, for the year 2001- 2004. Till date, Dr Rajanikant has worked as a Principal Investigator in various Government funded research projects, and has further guided and supervised several Doctorate and Post- Doctorate students and researchers.   He has also successfully applied for an Indian Patent in the year 2017 for using a pharmaceutical composition consisting of 1,4-DI(1H-benzimidazol-2-YL)-1,2,3,4-butanetetrol (BTT) as an ischemic neuroprotectant. He has also been invited as a speaker to various prestigious conferences, and has himself conducted many conferences, workshops and seminars successfully. Dr Rajanikant has several articles in renowned national and international journals, as well as, book chapters and edited volumes, to his credit.
Dr Pierre Gressens is presently holding several prominent positions, including- a Research Officer (DR1 Inserm) and Director, UMR 1141 Inserm-Paris University, Robert-Debré Hospital, Paris, France; Professor of Fetal and Neonatal Neurology, KCL, London, UK; Consultant, Service of Pediatric Neurology, Robert-Debré Hospital, Paris, France; Director, PremUP Foundation, Paris; Coordinator of the University-Hospital Department PROTECT, Robert Debré Hospital, Paris; and Vice-Dean for Research, Paris-Diderot Medical school, Paris, France. He obtained his M.D. and Ph.D. degrees from University of Louvain Medical School at Brussels, Belgium. He has received various honors, such as, Roger de Spoelberch award for neurosciences (Switzerland) in 2010, FRM Fondation Guillaumat-Piel award (France) in 2013, and the Elsie Widdowson Lecture at the Neonatal Society, London, UK in 2017. Dr Gressens has been invited as a speaker to various prestigious conferences. He has published his research/ review articles in many international journal of great repute.
Dr Sreekala S. Nampoothiri is currently a post-doctoral researcher at INSERM 1172, Development and plasticity of the neuroendocrine brain, Université de Lille, Lille, France. She has a Phd in Biotechnology from National Institute of Technology Calicut, Kerala, on the thesis entitled “microRNA-9 upregulation integrates post-ischemic neuronal survival and regeneration-a systems biology approach”. She is a recipient of Raman Charpak Fellowship 2015 and performed a part of her doctoral thesis research at INSERM 1141, Université Paris Diderot, Hôpital Robert Debré, Paris. She was the University topper for her Masters (M.Tech) programme in Biotechnology and Biochemical Engineering (specialization in Molecular Medicine) at Sree Buddha College of Engineering, University of Kerala, Thiruvananthapuram, India, as well as for her Bachelors (B.E.) in Biomedical Engineering, from Anna University, Tamil Nadu, India. She was also selected by Indian Academy of Sciences as Summer Junior Research Fellow (SJRF) in May 2012. She has published articles in journals of good repute, and has also presented posters at various conferences and seminars.
Gokul Surendran is currently pursuing his PhD. from National Institute of Technology, Calicut, Kerala, India. He did his M. S. (Pharm.) Biotechnology from National Institute of Pharmaceutical Education and Research, Hajipur, India. He was also awarded a Fellowship during his M. S. [Pharm.] from Ministry of Chemicals and Fertilizers (Government of India), and has further qualified the National Institute of Pharmaceutical Education and Research (NIPER) Joint Entrance Examination (NIPER-JEE- 2014) with 400th Rank in all India and Graduate Pharmacy Aptitude Test (GPAT) Examination (GPAT 2014) with All India Rank of 204. He has also presented at various conferences and seminars and published a few articles in good journals.
Dr Cindy Bokobza holds a Master's degree from the European Master's in Genetics (Magistère) Program at the Université de Paris and from the University of Trieste, Italy. She worked as an intern at the Center for Human Disease Modeling (CHDM) at Duke University, USA. She obtained her PhD,in Neuroscience from the Université de Paris (Ecole Doctorale BioSPC) for her studies on the impact of perinatal inflammation on neurodevelopment in the team of Pierre Gressens at the  Hôpital Robert Debré, Paris. Cindy was a G.E.N.E. Fellow for postdoctoral research, funded by the EUR G.E.N.E. Graduate School (#ANR-17-EURE-0013). She also served as a Student Representative at PhD School Bio Sorbone Paris Cité.