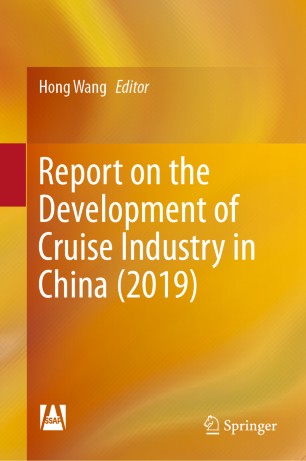 Report on the Development of Cruise Industry in China (2019)

WANG Hong, Doctor of Business Administration from Shanghai Jiao Tong University and Postdoctor of Applied Economics from Fudan University, is now Secretary of Baoshan District Committee of the Communist Party of China, Fellow of Shanghai International Cruise Business Institute, Doctoral Supervisor and Professor in Shanghai Jiaotong University, enjoying the special allowance granted by the State Council, Deputy to the 10th, 11th, 12th and 14th Shanghai Municipal People’s Congress, and Candidate for “the New Century National Hundred Thousand-and-Ten Thousand Talents Project”.
Professor WANG Hong has been serving as the Vice Chairman of the Professional Education Steering Committee on Business Administration of Colleges and Universities, the Ministry of Education for a long time and she once served as the Vice Chairman of the Professional Education Steering Committee on Management Science and Engineering of Colleges and Universities, the Ministry of Education. At present, Professor WANG Hong is one of the scholars listed in the New Century Talent Support Program of the Ministry of Education, Shanghai Dawn (Shuguang) Program and Shanghai Dawn (Shuguang) Tracking Program, honored as the leading talent and excellent academic leader of Shanghai Municipality.
Taking the initiative to link up with the development of cruise industry at home and abroad, Professor WANG Hong has been innovatively exploring the connotation of the specialty “tourism management”, taking the lead in starting the “cruise economy” bachelor's degree program and master's degree program, and serving as the academic leader in China. The “Innovative Practice For the Government-Industry-University-Institute-Customer-based Cultivation of Urgently Needed Talents for International Cruise Industry” Project led by Professor WANG Hong won the National Second Prize for Teaching Achievements and Shanghai Special Prize for Teaching Achievements in 2014. Professor WANG Hong has also been paying attention to the direct transformation and popularization of scientific research achievement into productivity, and many of his achievements already have been transformed into the basis for the cruise lines and the governments to make decisions. She has successively organized several major projects of National Social Science Foundation and national soft science projects, six major projects of National Development and Reform Commission (NDRC), and over 30 provincial and ministerial research projects, published over 70 monographs and papers, many of which have been included by EI and ISTP. More than 30 of her research achievements have been successively awarded, including the first prize of Shanghai for Governmental Decision-Making and Consultation Research Achievements, the second prize of Shanghai for Science and Technology Progress Award, the excellent award of Shanghai for Deng Xiaoping Theory Research and Publicity, the excellent award of Shanghai For Internal Discussion of Philosophy and Social Science, the first prize of Shanghai for Teaching Achievements, and the first prize of Shanghai for Education and Scientific Research Achievements and other provincial and ministerial awards.
Professor WANG Hong once served as the Executive Committee Member of the All-China Federation of Trade Union, Representative of the All-China Women’s Federation, President of Shanghai University of Engineering Science, Vice-Chairman of Shanghai Federation of Trade Unions, Vice-Chairman of Shanghai Commercial Enterprise Management Association, Vice-Chairman of Shanghai Creative Industry Association, Vice-Chairman of Shanghai Science and Art Society, and Director of Shanghai International Cruise Business Institute, etc.