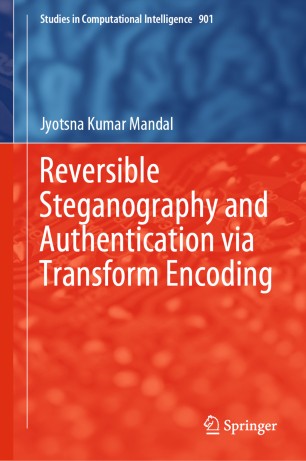 This book focuses on reversible steganography and authentication via transform encoding, fully discussing in detail the reversibility computation of six transformation techniques: DFT, DCT, wavelets, Z, binomial and grouplet, as well as chaos-based authentication. The book also describes algorithmic approaches based on all transformations along with implementation details and results. Further topics include embedding and extraction into the spatial domain, tuning using GA-based approaches and embedding into imaginary coefficients of the Z domain.
Featuring detailed algorithms for encryption and descriptions of all techniques, including embedding techniques for all transform-based steganographic processes, the book also explores the adjustment of pixel values after embedding and presents numerical examples of reversible computations. In the context of chaos-based authentication, it also describes testing the quality of generator is using Monobit, Serial and Poker tests. The book then outlines 15 test cases recommended by NIST fifteen test cases, along with their implementation on six evolutionary algorithms for neural cryptographic systems in the context of wireless computations – TPM, KSOMSCT, DHLPSCT, CHDLPSCT, CTHLPSCT and CGTHLPSCT – and verifies their satisfiability based on the implementations of these six techniques. Lastly it presents various metrics of image processing systems.
This book is a valuable reference resource for research scholars, PG/UG students and practicing engineers

Jyotsna Kumar Mandal received his M.Tech. in Computer Science from the University of Calcutta in 1987, and his Ph.D. (Engineering) in Computer Science and Engineering from Jadavpur University in 2000. He is a Professor of Computer Science & Engineering, and was Dean of the Faculty of Engineering, Technology & Management at KU from 2008-2012. He has also served as the Director of IQAC at Kalyani University; Chairman of CIRM; a Professor of Computer Applications at Kalyani Government Engineering College; Professor of Computer Science at North Bengal University; and a Lecturer at NERIST, Itanagar. He has 33 years of teaching and research experience in the field of coding theory, data and network security and authentication, remote sensing & GIS-based applications, data compression, error correction, visual cryptography and steganography. He was Guest Editor of Springer’s MST Journal (SCI indexed) and has published more than 400 research articles in national and international journals. He has also published 7 books, organized 34 international conferences. In addition he has served as a Corresponding Editor and Volume Editor for leading international publishing houses. He received the Siksha Ratna Award for outstanding teaching from the Government of West Bengal, in 2018; Vidyasagar Award from the International Society for Science Technology and Management at the Fifth International Conference on Computing, Communication and Sensor Networks 2016; Chapter Patron Award, CSI Kolkata Chapter at the CSI Annual Convention in 2014; Bharat Jyoti Award for meritorious services, outstanding performance and remarkable role in the field of Computer Science & Engineering in 2012 from International Friendship Society (IIFS), New Delhi; and the A. M. Bose Memorial Silver Medal and Kali Prasanna Dasgupta Memorial Silver Medal from Jadavpur University.