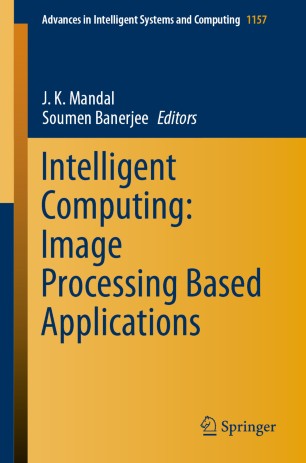 Part of the Advances in Intelligent Systems and Computing book series (AISC, volume 1157)

This book features a collection of extended versions of papers presented at OPTRONIX 2019, held at the University of Engineering & Management, Kolkata, India, on 18 – 20, March 2019. It includes research on the detection of skin disease, breast tumors, lung cancer and rotten fruit based on intelligent image processing applications, intelligent computing, neuro-fuzzy applications, soil moisture prediction, intelligent encryption and authentication, as well as image analysis and image analytics.

J. K. Mandal, M. Tech. in Computer Science from the University of Calcutta in 1987, was awarded Ph.D. (Engineering) in Computer Science and Engineering by Jadavpur University in 2000. Presently, he is working as a Professor of Computer Science & Engineering and was former Dean, Faculty of Engineering, Technology & Management, KU, for two consecutive terms during 2008-2012. He was Director, IQAC, Kalyani University, and Chairman, CIRM and Placement Cell. He served as a Professor of Computer Applications, Kalyani Government Engineering College, for two years, as an Associate Professor of Computer Science for eight years at North Bengal University, as an Assistant Professor of Computer Science, North Bengal University, for seven years, and as a Lecturer at NERIST, Itanagar, for one year. He has 32 years of teaching and research experience in coding theory, data and network security and authentication, remote sensing & GIS-based applications, data compression, error correction, visual cryptography and steganography. He awarded 23 Ph.D. degrees, one submitted and 8 are pursuing. He has supervised 03 M.Phil., more than 70 M.Tech. and more than 125 M.C.A. Dissertations. He was Guest Editor of MST Journal (SCI indexed) of Springer. He has published more than 400 research articles out of which 167 articles in international journals. He has published 7 books from LAP Germany, IGI Global, etc. He has organized 31 international conferences and was one of the corresponding editors of edited volumes and conference publications of Springer, IEEE, Elsevier, etc., and he has edited 32 volumes as volume Editor.

Prof. Soumen Banerjee is Head of the Department of Electronics & Communication Engineering at the University of Engineering & Management, Kolkata, West Bengal, India. He was the visiting Faculty at the Department of Applied Physics, University of Calcutta, and an Ex-Faculty of IEM, Salt Lake, Kolkata. He is into the teaching profession for more than 18 years and received Best Teacher Award from UEM-Kolkata in 2018. He obtained his B.Sc. (Honors) degree in Physics, B.Tech. and M.Tech. degrees in Radio Physics and Electronics from the University of Calcutta. He is presently associated with research activities at the Indian Institute of Engineering Science and Technology (IIEST), Shibpur, India. His research interests include design, fabrication and characterization of wide band gap semiconductor-based Impatt diodes at D-band, W-band and THz frequencies, Substrate Integrated Waveguide (SIW) technology-based antennas, printed antennas and arrays. He has published more than 80 contributory papers in journals and international conferences and received Best Paper Award in IEEE OPTRONIX-2016 conference. He is the recipient of the National Scholarship, 2001 from Government of India, Ministry of HRD. Prof. Banerjee is the author of the books titled “Principles of Communication Engineering,” “Electromagnetic Field Theory,” “Communication Engineering-II,” “Electromagnetic Theory & Transmission Lines,” “Antenna Theory” and some others. He is a Corporate member of IEEE & IEEE AP Society and member of other professional societies like IETE (New Delhi) and IE (India). Prof. Banerjee is the reviewer of several Books Publishing Houses and also reviewer of several international journals like IEEE Sensors Letter, Microwave and Optical Technology Letters (MOTL-Wiley), Journal of Electromagnetic Waves and Applications (Taylor & Francis), Radioengineering Journal (Czech and Slovak Technical Univ.), Journal of Computational Electronics (Springer Nature), Journal of Renewable and Sustainable Energy (American Institute of Physics-AIP), and Journal of Infrared, Millimeter, and Terahertz Waves (Springer Nature).