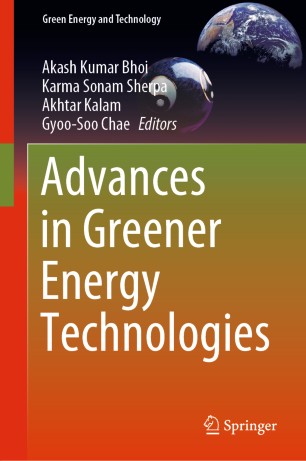 This book presents ongoing research activities of currently available renewable energy technologies and the approaches towards clean technology for enabling a socio-economic model for the present and future generations to live in a clean and healthy environment. The book provides chapter wise implementation of research works in the area of green energy technologies with proper methods used with solution strategies and energy efficiency approaches by combining theory and practical applications. Readers are introduced to practical problems of green computation and hybrid resources optimization with solution based approaches from the current research outcomes. The book will be of use to researchers, professionals, and policy-makers alike.

Dr. Akash Kumar Bhoi (Ph.D., M.Tech., B.Tech.) is currently an Assistant Professor in the Department of Electrical and Electronics Engineering at Sikkim Manipal Institute of Technology (SMIT), SMU, India. He has specialized in the ﬁeld of Biomedical Engineering and Renewable Energy. His areas of research are Biomedical Signal Processing, Renewable Energy, Computational Approaches and Patter Recognition, etc. He is also a reviewer of journals of national and international repute. He has published several papers in national and international journals and conferences. He has also served on numerous organizing panels for international conferences and workshops. He is currently editing several books with Springer Nature and is also the Guest editor for special issues in Springer Nature journals.
Prof. (Dr.) Karma Sonam Sherpa completed his B.E. (Electrical Engineering) from MREC, Jaipur, and M.Tech. in Power Electronics and Machine Drives from IIT Kharagpur in 1996 and 2003, respectively. He has a doctorate from Sikkim Manipal University. Currently, Prof. Sherpa is Dean of Research & Development and a Professor in the Department of Electrical & Electronics Engineering. His areas of research are DC power conversion and nonlinear dynamics, voltage stability and load management in power distribution systems and electromagnetic levitation systems, electric power distribution system, power electronics and electrical drives. He has published papers in national and international journals and conferences. He has organized workshop, seminars and conference.
Prof. (Dr.) Akhtar Kalam has been at Victoria University, Melbourne since 1985 and is currently the Head of Engineering and the Chair of the Academic Board and lectures in the Master’s by coursework program at Engineering Institute of Technology, Perth, Australia. Further, he has Distinguished Professorship position at the University of New South Wales, Sydney and 5 Malaysian universities. He received his B.Sc. and B.Sc. Engineering from Calcutta University and Aligarh Muslim University, India. He completed his M.S. and Ph.D. at the University of Oklahoma, USA and the University of Bath, UK. His major areas of interests are power system analysis, communication, control, protection, renewable energy, smart grid, IEC61850 implementation and cogeneration systems. He has conducted research, provided industrial consultancy and published over ﬁve hundred publications on his area of expertise and written over 29 books in the area.
Prof. (Dr.) Gyoo-Soo Chae received his Ph.D. (Electrical Engineering) from Virginia Polytechnic Institute and State University (Virginia Tech), Blacksburg, VA. After receiving the Ph.D., he shortly worked at Amphenol Mobile, Korea as a RF manager. He has been a Professor at Baekseok University in Korea since 2003. He has been granted a department scholarship (Kyungpook National University grant) and is associated with IEEE Antennas and Propagation Society. He serves as the editor-in-chief of The Korea Institute of Information, Electronics, and Communication Technology since 2013. His research interests are antennas and dual-band inverted-F antenna.