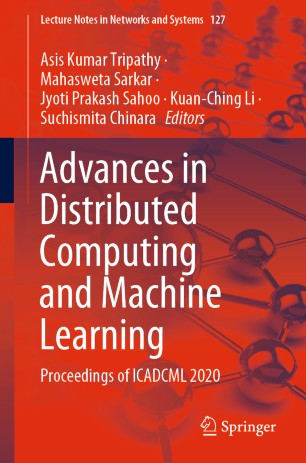 Part of the Lecture Notes in Networks and Systems book series (LNNS, volume 127)

This book presents recent advances in the field of distributed computing and machine learning, along with cutting-edge research in the field of Internet of Things (IoT) and blockchain in distributed environments. It features selected high-quality research papers from the First International Conference on Advances in Distributed Computing and Machine Learning (ICADCML 2020), organized by the School of Information Technology and Engineering, VIT, Vellore, India, and held on 30–31 January 2020.

Asis Kumar Tripathy is an Associate Professor in the School of Information Technology and Engineering, Vellore Institute of Technology, Vellore, India. He has more than ten years of teaching experience. He completed his Ph.D. from the National Institute of Technology, Rourkela, India, in 2016. His areas of research interests include wireless sensor networks, cloud computing, Internet of things and advanced network technologies. He has several publications in refereed journals, reputed conferences and book chapters to his credit. He has served as a program committee member in several conferences of repute. He has also been involved in many professional and editorial activities.

Mahasweta Sarkar is currently working as a Professor of the Department of Electrical and Computer Engineering in San Diego State University in 2006. Her M.S. and Ph.D. degrees were completed at the University of California, San Diego (UCSD), in 2003 and 2005, respectively. She received her B.S. degree in Computer Science & Engineering (Summa Cum Laude) in May 2000 from San Diego State University. Dr. Sarkar is a recipient of the “President's Leadership Award for Faculty Excellence” for the year 2010. She delivered invited lectures and keynotes in different universities spread all over the globe. The talks were on Wireless Body Area Networks and Brain–Computer Interface. Her research interest lies in the area of MAC layer power management algorithms and Quality-of-Service issues and protocols in WLANs, WMANs, WBANs, sensor networks and wireless ad hoc networks. She has published over eighty research papers in these fields in various international journals and conferences of high repute.

Jyoti Prakash Sahoo is working as an Assistant Professor in the Institute of Technical Education and Research (ITER), Siksha ‘O’ Anusandhan (SOA) Deemed to be University, Bhubaneswar, India. He is having more than 12 years of academic and research experience in Computer science and engineering education. He has published several research papers in various international journals and conferences. He is also serving many journals and conferences as an editorial or reviewer board member. He is having expertise in the field of Cloud computing and Machine learning. He served as publicity chair and organizing member of technical program committees of many national and international conferences. Being a WIPRO Certified Faculty, he has also contributed to industry-academia collaboration, student enablement, and pedagogical learning. Furthermore, he is associated with various educational and research societies like IEEE, IET, IACSIT, IAENG, etc.

Kuan-Ching Li is currently appointed as Distinguished Professor at Providence University, Taiwan. He is a recipient of awards and funding support from several agencies and high-tech companies, as also received distinguished chair professorships from universities in several countries. He has been actively involved in many major conferences and workshops in program/general/steering conference chairman positions and as a program committee member, and has organized numerous conferences related to high-performance computing and computational science and engineering. Professor Li is the Editor-in-Chief of technical publications Connection Science (Taylor & Francis), International Journal of Computational Science and Engineering (Inderscience) and International Journal of Embedded Systems (Inderscience), and serves as associate editor, editorial board member and guest editor for several leading journals. Besides publication of journal and conference papers, he is the co-author/co-editor of several technical professional books published by CRC Press, Springer, McGraw-Hill, and IGI Global. His topics of interest include parallel and distributed computing, Big Data, and emerging technologies. He is a Member of the AAAS, a Senior Member of the IEEE, and a Fellow of the IET.