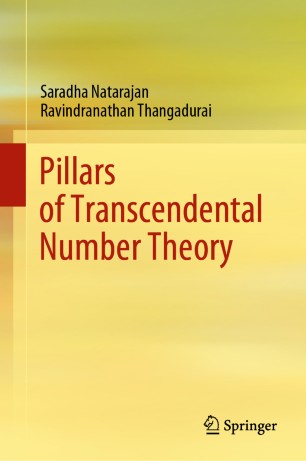 This book deals with the development of Diophantine problems starting with Thue's path breaking result and culminating in Roth's theorem with applications. It discusses classical results including Hermite–Lindemann–Weierstrass theorem, Gelfond–Schneider theorem, Schmidt’s subspace theorem and more. It also includes two theorems of Ramachandra which are not widely known and other interesting results derived on the values of Weierstrass elliptic function.

Given the constantly growing number of applications of linear forms in logarithms, it is becoming increasingly important for any student wanting to work in this area to know the proofs of Baker’s original results. This book presents Baker’s original results in a format suitable for graduate students, with a focus on presenting the content in an accessible and simple manner. Each student-friendly chapter concludes with selected problems in the form of “Exercises” and interesting information presented as “Notes,” intended to spark readers’ curiosity.

Saradha Natarajan is an INSA Senior Scientist at the DAE Center for Excellence in Basic Sciences (CEBS) at the University of Mumbai. Earlier, she was a Professor of Mathematics at the Tata Institute of Fundamental Research, Mumbai, until 2016. She was a postdoctoral fellow at Concordia University, Canada; Macquarie University, Australia; National Board of Higher Mathematics (NBHM), India. She is an elected fellow of the Indian National Science Academy (INSA). She obtained her Ph.D. in 1983 under the guidance of Professor T. S. Bhanumurthy from Ramanujan Institute for Advanced Study in Mathematics, University of Madras, Chennai.

Her area of specialization is number theory, in general, and transcendental number theory and Diophantine equations, in particular. She has published several papers in international journals of repute. She has made substantial contributions to the conjectures of Erdos on perfect powers in arithmetic progressions, where combinatorial and computational methods, linear forms in logarithms and modular method are combined. For instance, it is shown that product of k (>1) successive terms from arithmetic progression with common difference d is cube or higher power only for d large. She has also made significant contributions to Thue equations and Diophantine approximations, especially towards conjectures of Bombieri, Mueller and Schmidt on number of solutions of Thue inequalities for forms in terms of number of non-zero coefficients of the form. Using new induction technique, an old result of Siegel on the number of primitive solutions of Thue inequalities was improved significantly. In the area of transcendence, she has obtained best possible simultaneous approximation measures for values of exponential function and Weierstarss elliptic function. Further, significant lower bounds were shown for the Ramanujan tau-function for almost all primes p. Some problems in elementary number theory have also attracted her attention, for example on a conjecture of Pomerance on residue systems and its generalizations. It is shown that 2, 3, 7 are the only primes p for which there exist p consecutive primes forming complete residue system mod p. She has collaborated with many mathematicians both in India and abroad and guided students for Ph.D. and graduation. She has travelled widely and given invited talks and lectures at seminars and conferences.

Ravindranathan Thangadurai is Professor at Harish-Chandra Research Institute, Prayagraj. He earned his Ph.D. in Combinatorial Number Theory, in 1999, from the Mehta Research Institute for Mathematics and Theoretical Physics, Allahabad (now Harish-Chandra Research Institute, Prayagraj) under the supervision of Prof. S. D. Adhikari. He spent two years as a postdoc at the Institute of Mathematical Sciences, Chennai, and two years at Indian Statistical Institute, Kolkata, during 1999–2003. He has been teaching undergraduate and postgraduate students in many summer and winter schools every year, apart from the regular teaching at HRI. He has been travelling widely in India and abroad for workshops and conferences.

His research interests include analytic, combinatorial and transcendental number theory. To be more specific, major contributions in the area of zerosum problems in finite abelian groups, distribution of residues modulo p, Liouville numbers and Schanuel’s conjecture in transcendental number theory. In this area, he has published his research articles in reputed journals and worked with many reputed mathematicians. He has computed the exact values of Olson’s constant and Alon–Dubiner constant for subsets for the group. He proved a conjecture of Schmid and Zhuang for large class of finite abelian p-groups and the current best known upper bound for Davenport’s constant for a general finite abelian group. He also has made another major contribution to the theory of distribution of particular type of elements (specially, quadratic non-residues but not a primitive root) of residues modulo p. He has proved a strong form of Schanuel’s conjecture in transcendental number theory for many n-tuples.