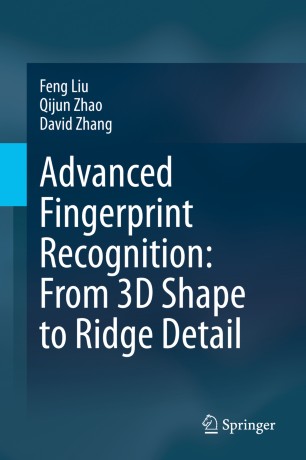 Fingerprints are among the most widely used biometric modalities and have been successfully applied in various scenarios. For example, in forensics, fingerprints serve as important legal evidence; and in civilian applications, fingerprints are used for access and attendance control as well as other identity services. Thanks to advances in three-dimensional (3D) and high-resolution imaging technology, it is now feasible to capture 3D or high-resolution fingerprints to provide extra information and go beyond the traditional features such as global ridge patterns and local ridge singularities used in conventional fingerprint recognition tasks.
This book presents the state of the art in the acquisition and analysis of 3D and high-resolution fingerprints. Based on the authors’ research, this book focuses on advanced fingerprint recognition using 3D fingerprint features (i.e., finger shape, level 0 features) or high-resolution fingerprint features (i.e., ridge detail, level 3 features). It is a valuable resource for researchers, professionals and graduate students working in the field of computer vision, pattern recognition, security/biometrics practice, as well as interdisciplinary researchers.

Feng Liu is currently an Assistant Professor at the School of Computer Science & Software Engineering, Shenzhen University. She received her Ph.D. degree from the Department of Computing at the Hong Kong Polytechnic University in 2014. Her research interests include pattern recognition and image processing, with a particular focus on fingerprints.

Qijun Zhao received his Ph.D. from The Hong Kong Polytechnic University in 2010; his M.Sc. and B.Sc. from Shanghai Jiao Tong University in 2003 and 2006, respectively; and completed his postdoc at Michigan State University in 2010-2012. He is a Professor at Sichuan University’s College of Computer Science, and a Visiting Professor at the School of Information Science and Technology at Tibet University (2019-2020). His research is in the fields of pattern recognition, image processing, computer vision and biometrics.

David Zhang is a Presidential Chair Professor at the Chinese University of Hong Kong (Shenzhen). He was a Chair Professor at the Hong Kong Polytechnic University, where he has been the Founding Director of the Biometrics Research Centre (UGC/CRC), supported by the Hong Kong SAR Government, since 2005. Currently he also serves as Visiting Chair Professor at Tsinghua University and HIT, and Adjunct Professor at Shanghai Jiao Tong University, Peking University, National University of Defense Technology and the University of Waterloo. Over the past 40 years, he has worked on pattern recognition, image processing and biometrics, and has received various awards for his research developments, including palmprint recognition, computerized TCM and facial beauty analysis. Prof. Zhang is one of the best-known international experts in the field of biometrics and he has published over 20 monographs, 480 international journal papers and 40 patents in USA/Japan/HK/China. He was listed as a Highly Cited Researcher in Engineering by Clarivate Analytics in 2014, 2015, 2016, 2017 and 2018, respectively. He is also ranked about 80 in the top 1,000 scientists for international computer science and electronics. Professor Zhang is a Croucher Senior Research Fellow, Distinguished Speaker of the IEEE Computer Society, and a Fellow of both IEEE and IAPR.