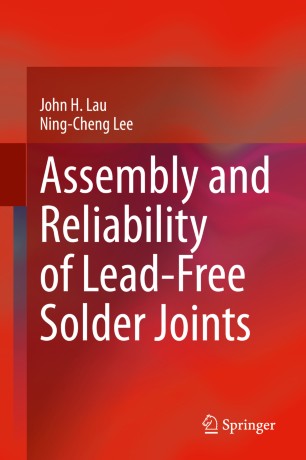 This book focuses on the assembly and reliability of lead-free solder joints. Both the principles and engineering practice are addressed, with more weight placed on the latter. This is achieved by providing in-depth studies on a number of major topics such as solder joints in conventional and advanced packaging components, commonly used lead-free materials, soldering processes, advanced specialty flux designs, characterization of lead-free solder joints, reliability testing and data analyses, design for reliability, and failure analyses for lead-free solder joints. Uniquely, the content not only addresses electronic manufacturing services (EMS) on the second-level interconnects, but also packaging assembly on the first-level interconnects and the semiconductor back-end on the 3D IC integration interconnects. Thus, the book offers an indispensable resource for the complete food chain of electronics products.

John H. Lau, Ph.D., P.E. has been the CTO of Unimicron in Taiwan since August 2019. Prior to that, he was a Senior Technical Advisor at ASM Pacific Technology in Hong Kong for 5 years; a specialist of the Industrial Technology Research Institute in Taiwan for 4½ years and a Senior Scientist/MTS at Hewlett-Packard Laboratory/Agilent in California for more than 25 years. He earrned a Ph.D. degree in theoretical and applied mechanics from the University of Illinois at Urbana–Champaign.

He has received many awards from the American Society of Mechanical Engineers (ASME), the Institute of Electrical and Electronics Engineers (IEEE), the Society of Manufacturing Engineers (SME) and other societies. He is an elected ASME fellow, IEEE fellow, and IMAPS fellow, and has been heavily involved in many of ASME’s, IEEE’s, and IMAPS’ technical activities.

Ning-Cheng Lee is the Vice President of Technology of Indium Corporation. He has been with Indium since 1986. Prior to joining Indium, he was with Morton Chemical and SCM. He has more than 30 years of experience in the development solder materials for SMT industries. In addition, he also has very extensive experience in the development of underfills and adhesives. He received his PhD in polymer science from University of Akron in 1981.

Ning-Cheng has created numerous superior products. The electronics assembly materials, such as the industry benchmarks NC-SMQ92J and NC-SMQ230 solder pastes, have enabled the industry to achieve significantly higher yield and higher reliability. The most significant contributions are removing the art of SMT assembly and replacing it with science, for which he was bestowed SMTA Member of Distinction Award.

Ning-Cheng received 1991 award from SMT Magazine, 2008 and 2014 awards from IPC for Honorable Mention Paper – USA Award of APEX conference, and 2010 Best Paper Award of SMTA China South Conference.  He was honored as 2002 Member of Distinction from SMTA, 2007 Distinguished Lecturer from CPMT, 2009 Distinguished Author from SMTA, 2015 Founder’s Award from SMTA, and 2017 IEEE Fellow. He has served on the board of governors for CPMT and SMTA board of directors. He served as editorial advisory board of Soldering and Surface Mount Technology, Global SMT & Packaging and as associate editor for IEEE Transactions on Components Packaging Manufacturing Technology.  He has numerous publications and frequently gives presentations, invited to seminars, keynote speeches and short courses worldwide on those subjects at international conferences and symposiums.

“The book gives a wide perspective on the technical insights of lead-free solder joint reliability and packaging approaches in the industry while adding very valuable solder joint reliability insights. It is a good resource to demonstrate the many facets of advance assembly of lead-free solders and can serve as a very informative technical reference. Valuable as a learning tool of semiconductor packaging and assembly reliability, its clear relevance to real-world industry practices make it useful for both academics and semiconductor industry practitioners.” (Chong Leong Gan and Hem Takiar, Life Cycle Reliability and Safety Engineering, July 31, 2020)