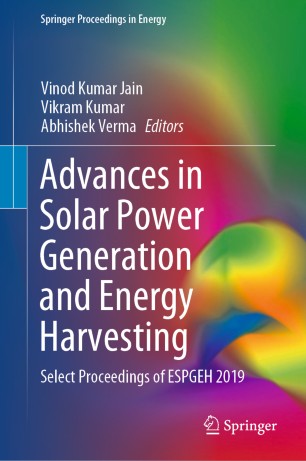 Part of the Springer Proceedings in Energy book series (SPE)

This book contains selected and peer-reviewed papers presented at the International Conference on Efficient Solar Power Generation and Energy Harvesting (ESPGEH 2019). The primary focus of the book is on latest advances and scientific developments in the field of solar energy. The book covers various topics such as solar photovoltaics, solar energy harvesting, smart materials for energy applications, hybrid renewable energy plant, and on-grid and off-grid power plant. The book also discusses current techniques to produce energy-efficient solar cells, emerging materials and processes to develop cost-effective solar cells, and different issues in energy management. Given the scope of the contents, this book will be of interest for researchers, professionals as well as policy makers.

Prof. Vinod Kumar Jain obtained his Ph.D. in Solid State Physics from IIT Delhi, India. He joined Solid State Physics Laboratory and worked as Director Grade scientist. He was the head of the silicon devices and Micro Electro Mechanical Systems (MEMS) division, and has developed many new technologies. He has also developed the technology for space quality silicon solar cells and among these technologies a few have been transferred to industries. His work on electro-luminescence in porous silicon was considered as the first international observation and was reported as NEWS by Photonics spectra USA, Electronics Asia. Dr. Jain was also associated with the National Programme on Smart materials & MEMS technology from the beginning. He has published more than 160 papers in national and international journals, edited a few books and has filed 40 patents. He also worked as Emeritus Scientist of CSIR at NPL up to June 2007. He got the Award in 2012 from “Power of Ideas” (DST programme) and from Royal Academy of U.K. “On the pocket friendly reusable water purification system” based on nanomaterials. His areas of  interest include solar energy, sensors, bio-sensors, water purification. He has started two new institutes at Amity University – Amity Institute for Advanced Research and Studies (Materials & Devices) & Amity Institute of Renewable and Alternative Energy, where he is working as a Distinguished Scientist & Professor.

Prof. Vikram Kumar is well known in the area of semiconductor materials, characterization and device technology. His extensive work towards the understanding of electronic defects and interface states in silicon, III-V and II-VI semiconductors led to the prestigious Shanti Swarup Bhatnagar Award in 1992.  He led the setting up of GaAs Enabling Technology Centre (GAETEC) foundry at Hyderabad for pilot production of monolithic microwave integrated circuits (MMIC). Prof. Kumar is currently Chairman, Centre for Laboratory Accreditation, & Dr. Raja Ramanna Distinguished DRDO Fellow at SSPL, DRDO. He was formerly Emeritus Professor, IIT-Delhi; Professor, IIT Delhi; Director, National Physical Laboratory CSIR; and Director, Solid State Physics Laboratory, DRDO. He has been responsible for setting up the Nanoscale Research Facility at IIT Delhi. He has published over 190 papers in peer reviewed journals. He is a Fellow of the NASI, INAE and IETE in addition to being a member of several professional societies, some of which he is presiding. He was recognized as the Distinguished Materials Scientist of the Year 2012 by the Materials Research Society of India. He has received an honorary DSc from the Indian Institute of Engineering Science and Technology (IIEST), Howrah. He has been chair or member of several committees for DST, DIT, MNRE, MEITY, DRDO and other scientific agencies.

Dr. Abhishek Verma completed his Ph.D. in Electronic Science from Delhi University in 2009. He further joined National University of Singapore, Singapore, as a post-doctoral researcher in the area of solar cells. Presently, he is working as an Assistant Professor at Amity University Uttar Pradesh, Noida, India, where he is teaching at Amity Institute of Renewable & Alternative Energy and pursuing his research activities at Amity Institute for Advanced Research & Studies (Materials & Devices). His areas of interest are organic and inorganic third generation solar cells, nanomaterial characterization, nano-enhanced phase change materials, agrivoltaics, clean energy generation using ferro-fluids, quantum dots and sensors. He has handled various R & D projects, and he has also organized three prestigious international conferences. He has filed 15 patents and 1 granted. He has also edited 3 books and published more than 60 papers in peer-reviewed international journals and conference proceedings.