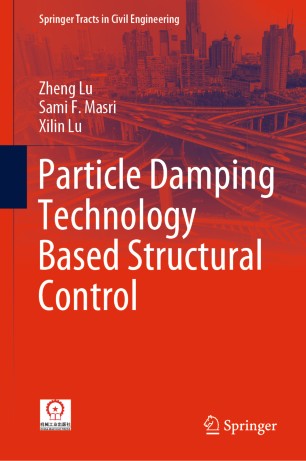 This book presents a systematic introduction to particle damping technologies, which can be used to effectively mitigate seismic-induced and wind-induced vibration in various structures. Further, it offers comprehensive information on the latest research advances, e.g. a refined simulation model based on the discrete element method and a simplified simulation model based on equivalent principles. It then intensively studies the vibration attenuation effects of particle dampers subjected to different dynamic loads; in this context, the book proposes a new damping mechanism and “global’’ measures that can be used to evaluate damping performance.

Moreover, the book uses the shaking table test and wind tunnel test to verify the proposed simulation methods, and their satisfactory damping performance is confirmed. To facilitate the practical engineering application of this technology, optimization design guidelines for particle impact dampers are also provided. In closing, the book offers a preliminary exploration of semi-active particle damping technology, which holds great potential for extension to other applications in which the primary system is subjected to non-stationary excitations.

Zheng Lu is a Professor at Tongji University. He has been investigating structural vibration control for more than 10 years, with a specialization in the research and development of novel dissipative devices based on particle damping technologies. He has presided over three projects and won the Excellent Youth Fund supported by the National Natural Science Foundation of China. Based on his extensive research into particle damping technologies, he has authored or co-authored more than 60 SCI-indexed papers and 40 EI-indexed papers.

Sami F. Masri is a Professor at the Sonny Astani Department of Civil and Environmental Engineering, University of Southern California. A pioneer in particle damping technologies, he finished the first systematic doctoral dissertation on the subject at California Institute of Technology in 1965. His nearly 40-year-long scientific research career has focused on investigating and developing these advanced vibration control technologies, including their theoretical analysis, numerical simulation and experimental study. Due to his remarkable research achievements in this field, he has won various influential medals, such as the American Society of Civil Engineers Norman Medal in 1997 and American Society of Civil Engineers Nathan M. Newmark Medal in 2007.

Xilin Lu is a Professor at Tongji University. He is a member of China Engineering Academy. He has specialized in structural seismic design, reinforced concrete structures and high-rise building structures, areas he has investigated for over 30 years. His main focus areas are novel technologies for disaster prevention and seismic mitigation, as well as earthquake resistance studies on complex high-rise buildings and their engineering applications. In the course of his career, he has presided over more than 60 national and provincial-level technological projects. He has published 8 monographs and over 400 research articles and has filled 62 patents.