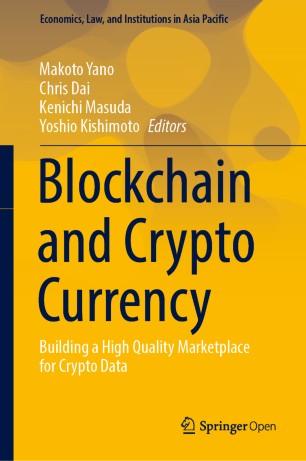 This open access book contributes to the creation of a cyber ecosystem supported by blockchain technology in which technology and people can coexist in harmony. Blockchains have shown that trusted records, or ledgers, of permanent data can be stored on the Internet in a decentralized manner. The decentralization of the recording process is expected to significantly economize the cost of transactions.

Creating a ledger on data, a blockchain makes it possible to designate the owner of each piece of data, to trade data pieces, and to market them. This book examines the formation of markets for various types of data from the theory of market quality proposed and developed by M. Yano. Blockchains are expected to give data itself the status of a new production factor. Bringing ownership of data to the hands of data producers, blockchains can reduce the possibility of information leakage, enhance the sharing and use of IoT data, and prevent data monopoly and misuse.

The industry will have a bright future as soon as better technology is developed and when a healthy infrastructure is created to support the blockchain market.

Makoto Yano is Chairman of the Research Institute of Economy, Trade and Industry (RIETI); he is also a specially appointed professor at Kyoto University, Jochi University, and Chubu University. He is an internationally known researcher who has made a number of substantial contributions in international trade, market theory, and especially on economic dynamics. His contributions in economic dynamics, for example, are represented by articles in Econometrica in 1995 and the Journal of Economic Theory in 1996, which explained the conditions under which general economic equilibrium shows chaotic behavior. His 1998 Econometrica article is recognized as the latest most important work on the characterization of dynamic general equilibrium.

Besides those rather theoretical works, Prof. Yano has also provided influential insights on contemporary real-world phenomena. Those include transfer problems (American Economic Review, 1999), voluntary export restraints (International Economic Review [IER], 1995), and trade conflicts (IER, 1998), on which there have been a number of follow-up papers.

His recent research on “market quality” addresses various problems in modern economies, including the financial market crisis since 2008 and the recent nuclear accidents in Japan, from the point of view of market quality—a new economic concept that Prof. Yano has developed and is applying to Japanese and international markets. Concerning quality of competition, quality of information, and quality of products, market quality is defined as an index jointly determined by the efficiency of an allocation and the fairness of the prices that are achieved in a market.

Chris Dai is the CEO and co-founder of Leland Capital, Recika Co., Ltd., and CEO of LongHash Japan. He has a broad range of business management and investment experience. He was formerly the COO / CIO of Yixing SCM (an international logistics provider), a consultant at Accenture, and a co-founder of multiple ventures. Starting in 2013, Mr. Dai was one of the early investors in Bitcoin and Ethereum. To promote the understanding of blockchain's true value, he joined the Research Institute of Economy, Trade and Industry's blockchain research team. He received a B.S. in management science and engineering from Stanford University in 2004.

Kenichi Masuda has been a partner at the law firm of Anderson, Mori & Tomotsune since 1997. He graduated from The University of Tokyo in 1986. After completing work at the Judicial Research and Training Institute, he joined the law firm in 1988. He graduated from The University of Chicago Law School in 1993 and became a member of the New York Bar Association.

Mr. Masuda has extensive experience in advising foreign clients and is familiar with cross-border issues, in particular, mergers and acquisitions of listed and unlisted businesses, joint ventures, and other cross-border investments, as well as corporate restructuring. The scope of his experience also includes assisting and representing venture companies and establishing venture capital or other private equity funds. He regularly provides legal services on employment and labor union relations (including representation of client companies in court and other dispute-resolution forums), real property transactions, intellectual property issues, and general corporate and commercial matters.

Mr. Masuda currently teaches at The University of Tokyo Law School as a visiting professor.

He has held various positions in METI including head of the Environment and Economy Office, Business Support Division of the SME Agency, and director general of the Kyushu Bureau of METI. He received his M.A. in international affairs from Columbia University in 1992 and a Bachelor of Law degree from The University of Tokyo in 1985.