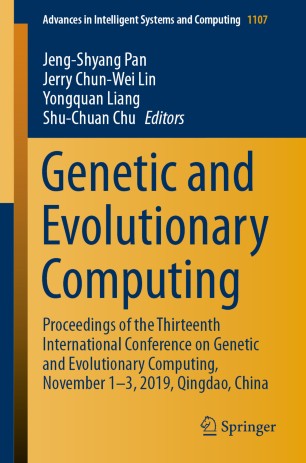 Part of the Advances in Intelligent Systems and Computing book series (AISC, volume 1107)

This book gathers papers presented at the 13th International Conference on Genetic and Evolutionary Computing (ICGEC 2019), which was held in Qingdao, China, from 1st to 3rd, November 2019. Since it was established, in 2006, the ICGEC conference series has been devoted to new approaches with a focus on evolutionary computing. Today, it is a forum for the researchers and professionals in all areas of computational intelligence including evolutionary computing, machine learning, soft computing, data mining, multimedia and signal processing, swarm intelligence and security.

The book appeals to policymakers, academics, educators, researchers in pedagogy and learning theory, school teachers, and other professionals in the learning industry, and further and continuing education.

Prof. Jeng-Shyang Pan is currently the Professor of College of Computer Science and Engineering, Shandong University of Science and Technology, Shandong, China. He received the B.S. degree in Electronic Engineering from the National Taiwan University of Science and Technology in 1986, the M.S. degree in Communication Engineering from the National Chiao Tung University, Taiwan, in 1988, and the Ph.D. degree in Electrical Engineering from the University of Edinburgh, UK, in 1996. He is a Fellow of The Institution of Engineering and Technology (IET), UK. In 2012, Prof. Pan was named in “National 1000 Talent Plan” in China. His current research interests include soft computing, information security, big data mining, and signal processing. Prof. Pan has published more than 500 research papers in academic journals and conferences with h-index of 39. He is the founding Editor-in-Chief of Journal of Information Hiding and Multimedia Signal Processing and International Journal of Innovative Computing, Information and Control.

Prof. Yongquan Liang is currently the Dean of the College of Computer Science and Engineering & Artificial Intelligence, Shandong University of Science and Technology, Qingdao, China. He graduated from Shandong University of Science and Technology in 1989 with a major in applied mathematics. In 1992 and 1999, he obtained master's and doctoral degrees in computer software and theory, respectively, from Beihang University and Institute of Computing Technology, Chinese Academy of Sciences. His research interests include machine learning and data mining, distributed artificial intelligence, Mine Internet of Things and cloud computing, big data analysis, and decision-making. He has undertaken more than ten national- or provincial-level projects and has won 3 provincial- and ministerial-level research awards and 5 teaching awards. He is currently chairing the National Key Research and Development Program “Mine IoT Cloud Interaction Technology and Service Platform,” the National Natural Science Foundation Major Research Project Cultivation Project “Agricultural Big Data Based Planting Structure Optimization and Production Management Decision Technology Research,” and participated in 1 National Natural Science Foundation Project (2nd place). He has been awarded the honorary title of the young and middle-aged academic backbone of Shandong Province, the outstanding postgraduate tutor of Shandong Province, thousands of well-known technical experts in Shandong Province, advanced individuals in Shandong Province, and the top ten young schools and outstanding education teachers.

Dr. Shu-Chuan Chu got her Ph.D. degree in Computer Science from Flinders University, Adelaide, South Australia. She is now an Adjunct Research Fellow at Flinders University. Dr. Chu has published more than 100 refereed papers with more than 3000 citations. Her h-index is 25. Her current research interests include computational intelligence and data mining.