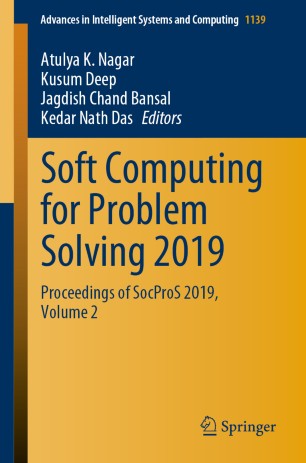 Part of the Advances in Intelligent Systems and Computing book series (AISC, volume 1139)

This book features the outcomes of the 9th International Conference on Soft Computing for Problem Solving, SocProS 2019, which brought together researchers, engineers and practitioners to discuss thought-provoking developments and challenges in order to identify potential future directions. The book presents the latest advances and innovations in the interdisciplinary areas of soft computing, including original research papers in areas such as algorithms (artificial immune systems, artificial neural networks, genetic algorithms, genetic programming, and particle swarm optimization) and applications (control systems, data mining and clustering, finance, weather forecasting, game theory, business and forecasting applications). It is a valuable resource for both young and experienced researchers dealing with complex and intricate real-world problems that cannot easily be solved using traditional methods.

Atulya K. Nagar holds the Foundation Chair as Professor of Mathematical Sciences, and is the Pro-Vice-Chancellor for Research and Dean of the Faculty of Science at Liverpool Hope University, United Kingdom. He is also the Head of the School of Mathematics, Computer Science and Engineering, which he established at the University. He is an internationally respected scholar working at the cutting edge of theoretical computer science, applied mathematical analysis, operations research, and systems engineering. He received a prestigious Commonwealth Fellowship to pursue his doctorate (DPhil) in Applied Nonlinear Mathematics, which he earned from the University of York (UK) in 1996. He holds a BSc (Hons), an MSc and MPhil (with distinction) in Mathematical Physics from the MDS University of Ajmer, India. His research expertise spans both applied mathematics and computational methods for nonlinear, complex, and intractable problems arising in science, engineering and industry.
Prof. Kusum Deep is a Professor at the Department of Mathematics, Indian Institute of Technology Roorkee. Her research interests include numerical optimization, nature inspired optimization, computational intelligence, genetic algorithms, parallel genetic algorithms, and parallel particle swarm optimization.
Dr. Jagdish Chand Bansal is an Assistant Professor at the South Asian University, New Delhi, India and visiting research fellow at Liverpool Hope University, UK. He has an excellent academic record and is a leading researcher in the field of swarm intelligence. He has published numerous research papers in respected international and national journals.
Dr. Kedar Nath Das is an Assistant Professor at the Department of Mathematics, National Institute of Technology, Silchar, Assam, India. Over the past 10 years, he has made substantial contributions to research on soft computing, and has published several papers in prominent national and international journals. His chief area of interest is evolutionary and bio-inspired algorithms for optimization.