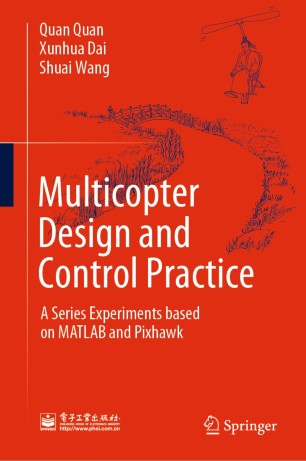 A Series Experiments based on MATLAB and Pixhawk

As the sister book to “Introduction to Multicopter Design and Control,” published by Springer in 2017, this book focuses on using a practical process to help readers to deepen their understanding of multicopter design and control. Novel tools with tutorials on multicopters are presented, which can help readers move from theory to practice.

Experiments presented in this book employ:

(2) The most widely-used flight pilot hardware – Pixhawk – as a control platform; and

Based on the current advanced development concept Model-Based Design (MBD)process, the three aspects mentioned above are closely linked.

Each experiment is implemented in MATLAB and Simulink, and the numerical simula-tion test is carried out on a built simulation platform. Readers can upload the controller to the Pixhawk autopilot using automatic code generation technology and form a closed loop with a given real-time simulator for Hardware-In-the-Loop (HIL) testing. After that, the actual flight with the Pixhawk autopilot can be performed.

This is by far the most complete and clear guide to modern drone fundamentals I’ve seen.It covers every element of these advanced aerial robots and walks through examples and tutorials based on the industry’s leading open-source software and tools. Read this book, and you’ll be well prepared to work at the leading edge of this exciting new industry.

The development of a multicopter and its applications is very challenging in the robotics area due to the multidomain knowledge involved. This book systematically addresses the design, simulation and implementation of multicopters with the industrial leading workflow – Model-Based Design, commonly used in the automotive and aero-defense industries. With this book, researchers and engineers can seamlessly apply the concepts, workflows, and tools in other engineering areas, especially robot design and robotics ap-plication development.

EX-product Manager of Robotics System Toolbox at the MathWorks

Quan Quan received his B.S. and Ph.D. degrees from Beihang University (Beijing University of Aeronautics and Astronautics), China in 2004 and 2010, respectively. He has been an associate professor at Beihang University since 2013. He is also the director of reliable flight control group at Beihang University. His main research interests include vision-based navigation and reliable flight control. To date he has published more than 40 peer-reviewed journal papers and 20 conference papers, including IEEE Transactions on Automatic Control, Mechatronics, Neural Networks and Learning Systems, Aerospace and Electronic Systems, Reliability and AIAA Journal of Guidance, Control, and Dynamics. In 2017, he published the first introductory book on multicopters, entitled with “Introduction to Multicopter Design and Control”. In addition, he has launched a design evaluation web for small aircraft.