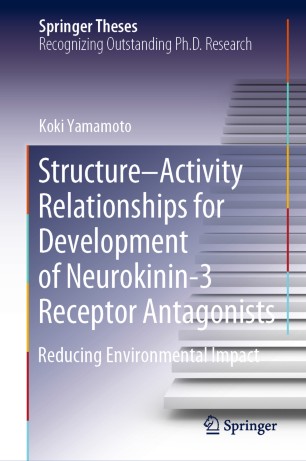 This book explores the possible development of neurokinin-3 receptor (NK3R) antagonists with reduced environmental impact.
Pharmaceuticals are used to cure diseases and to alleviate symptoms in humans and animals. However, the stable, bioactive substances excreted by patients have unfavorable effects on non-target species. To overcome these disadvantages of these highly stable, potent substances, drug design to turn off bioactivity after release into the environment is needed.
The book describes the development of eco-friendly NK3R antagonists by introducing a labile functional moiety and substituting a scaffold. This resulted in a novel NK3R antagonist that oxidized into its inactive form when exposed to air. Further, the book presents an efficient and easily achievable synthetic method of creating triazolopiperazine scaffolds, as well as a structure–activity relationship study involving scaffold hopping for decomposable motifs, which led to a novel photodegradable NK3R antagonist.
Demonstrating that it is possible to develop compounds that convert into their inactive forms under environmental conditions, this book is useful for anyone interested in therapeutic agents with reduced environmental impact.

“There is no book in the marketplace related to this subject matter, though the essential material has been published in different journals. Readers will find novelty in the overall scientific approach and methods presented in this book. Hence, it is expected to be useful to scientists who intend to work with NK3R antagonists.” (Rahmat M. Talukder, Doody's Book Reviews, May 29, 2020)