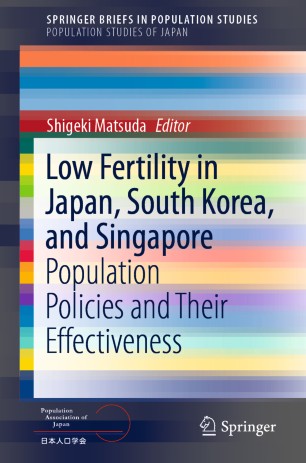 Population Policies and Their Effectiveness

This book describes the low fertility status in three developed Asian countries—Japan, South Korea, and Singapore—and outlines countermeasures for their declining birthrates. Based on the characteristics of each society, the authors discuss why their fertility rates have not yet recovered.

Low fertility is a demographic phenomenon that first occurred in Europe and subsequently spread across other countries. Currently, the fertility rates in Europe are relatively stable, while those in developed Asian economies are the lowest worldwide. This may cause labor shortages and weaken their social security systems, undermining Asia’s social and economic sustainability despite its remarkable economic development. In response to low fertility, some Asian countries have implemented countermeasures: Japan has introduced measures based on childcare facilities and work–life balance. Similarly, since the mid-2000s South Korea has established countermeasures to promote a balance between work and child rearing, as well as expanded childcare services. Singapore began introducing countermeasures before the other two countries, including various advanced measures. Yet none of these countries has seen a full recovery in fertility rates.

Based on a statistical analysis of survey results from the three countries, this book makes several important points. The first is that the policy has been ineffective in Japan due to a discrepancy between the needs of parents raising children and those who are the targets of the countermeasures. Second, the work–life balance and child-rearing support measures that have been promoted in Japan and South Korea have not affected the number of children that women want to have. Third, Singaporean values tend to place individual emphasis on competition with oneself (education and career status) rather than on married life. This intense competition has lowered fertility rates. To restore these rates, each country must promote policies that better address its specific issues.