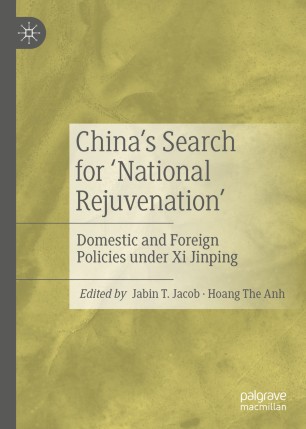 Communist Party of China General Secretary and Chinese President Xi Jinping has since taking power in 2012 launched a series of domestic reforms that have long-term consequences both internally and externally. These reforms aimed at the great ‘national rejuvenation’ of the Chinese people seek to convert China’s domestic strengths into global standing and leverage. Underlining the intimate connection between Chinese domestic policies and its external policies and outreach, this volume assesses a range of key domestic forces driving Chinese growth today ranging from economic reforms to governance practices to analyze their impact and influence at home as well as on China’s foreign and security policies in its near and extended neighbourhood. The volume also looks at specific themes like technology, agricultural development, reform of state-owned enterprises and the use of Party bodies to engage in foreign propaganda work among other things to offer examples of the merging of Chinese domestic political and foreign policy interests. In the process, the volume offers its readers a better idea of China’s place in the world as the Chinese themselves see it and the implications over time for China, its neighbourhood and the wider world.

Jabin T. Jacob is Associate Professor at the Department of International Relations and Governance Studies, Shiv Nadar University, India and Adjunct Research Fellow at the National Maritime Foundation, New Delhi, India. He was formerly Fellow and Assistant Director at the Institute of Chinese Studies, Delhi and Associate Editor of the journal China Report. Jacob holds a PhD in Chinese Studies and has spent time as a student/researcher/faculty in Taiwan, France and Singapore. His research interests include Chinese foreign policy, Sino-Indian border areas, Indian and Chinese worldviews, and centre-province relations in China. Jacob has co-edited several volumes on Indian and Chinese foreign policies and his work has appeared in multiple international journals, books and media.
Hoang The Anh is Vice Director-General, Institute of Chinese Studies at the Vietnam Academy of Social Sciences, Hanoi, Vietnam and Editor of the Chinese Studies Review (in Vietnamese). He holds a PhD in Sociology from the Department of Sociology at Sun Yat-Sen University in Guangzhou, China and had earlier completed a Masters in Social Sciences from the Institute of Asia–Pacific Studies, Nanhua University, Taiwan. Hoang’s research interests include China’s development strategy, China’s economy, society and Vietnam-China relations. His latest work is an edited volume on state-owned enterprises reform in China after the 18th Communist Party Congress and lessons for Vietnam (2018). He is also co-editor with Jabin T. Jacob of China and its Neighbourhood: Perspectives from India and Vietnam (2017).