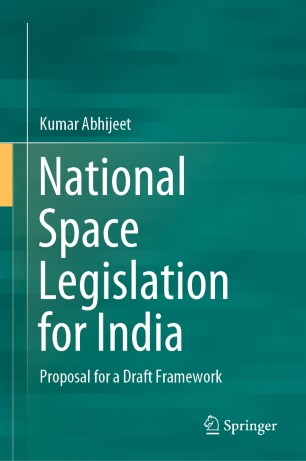 Proposal for a Draft Framework

Kumar Abhijeet completed his doctoral studies at the Institute of Air and Space Law, University of Cologne, Germany, and holds a Master of Laws degree from the National Law School of India University (NLSIU), Bachelor of Science & Bachelor of Laws degrees from the University of Delhi. He also has more than eight years of teaching experience at the  NLSIU, Bangalore.  He has been a Linnaeus-Palme fellow at the Royal Institute of Technology, Stockholm (Sweden) and Erasmus Mundus fellow at the Department of Public International Law, Ghent University, Belgium. On the occasion of fifty years of the Outer Space Treaty he was part of the 21-day workshop on space law conducted by the Centre for Studies and Research of The Hague Academy of International Law, the Netherlands. Dr. Abhijeet is an alumnus of the International Visitors Leadership Program (IVLP) – a U.S. Government premier professional exchange program for emerging international opinion leaders. Under the auspices of IVLP he was invited to visit NASA. He has published a number of papers in reputed  journals and has been an invited speaker in a number of distinguished conferences including the first United Nations conference on space law held in Moscow, Russia. He is also a member of the International Institute of Space law and the International Law Association (India Branch). Currently, Dr. Abhijeet is working with the Ministry of External Affairs, Government of India.