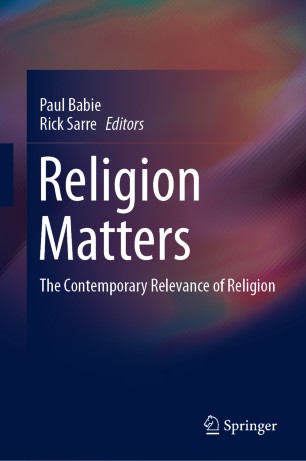 The Contemporary Relevance of Religion

This book draws together leaders in science, the health sciences, the humanities, and the social sciences to investigate the role of religion, its meaning and relevance, for their area of specialization. It provides a much-needed fresh perspective on the way in which religion operates within the modern, neo-liberal world.

The book approaches the topic by way of a critical engagement between religion, broadly defined, and the individual disciplines in which each of the contributors is expert. Rather than simply taking the dogmatic position that religion offers something to every possible discipline, each of the chapters in this collection addresses the question: is there something that religion can offer to the discipline in question? That is the value of the book – it takes a truly critical stance on the place of religion in contemporary society.

Paul Babie is Professor of Law and Director of the Law and Religion Research Project of the Research Unit for the Study of Society, Ethics, and Law (RUSSEL) (which he founded in 2007) at The University of Adelaide (Australia). He is a barrister and solicitor (inactive) of the Court of Queen’s Bench of Alberta (Canada), and an associate member of the Law Society of South Australia. His primary research interests include critical theory, private law theory, property theory, and liberation theology and religious legal systems. He has published and spoken extensively in these fields and he teaches property law, property theory, law and religion, water law, and Roman law.