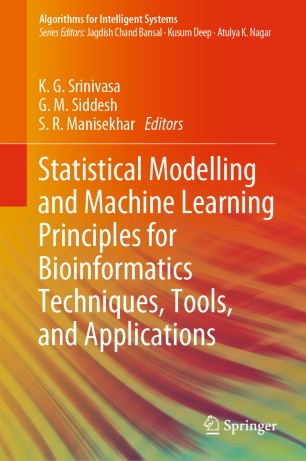 Part of the Algorithms for Intelligent Systems book series (AIS)

This book discusses topics related to bioinformatics, statistics, and machine learning, presenting the latest research in various areas of bioinformatics. It also highlights the role of computing and machine learning in knowledge extraction from biological data, and how this knowledge can be applied in fields such as drug design, health supplements, gene therapy, proteomics and agriculture.

Siddesh G. M. is currently working as an Associate Professor at the Department of Information Science & Engineering, Ramaiah Institute of Technology, Bangalore. He received Bachelors and Masters Degrees in Computer Science and Engineering from the Visvesvaraya Technological University in 2003 and 2005, respectively, and his Ph.D. in Computer Science and Engineering from Jawaharlal Nehru Technological University, Hyderabad, in 2014. He is a member of IEEE, ISTE, and IETE. He was the recipient of Seed Money to Young Scientist for Research (SMYSR) for 2014-15 from the Government of Karnataka’s Vision Group on Science and Technology (VGST). He has published numerous research papers in international journals and conferences. His research interests include distributed computing, grid/cloud computing, and IoT.

S. R. Mani Sekhar received his M.Tech. degree from Bharathidasan University, Tiruchirappalli, and B.E. degree from Rajiv Gandhi Proudyogiki Vishwavidyalaya, Bhopal. He is currently an Assistant Professor at the Department of Information Science & Engineering, Ramaiah Institute of Technology, Bangalore. He is a member of ISTE. He has published a numerous research papers and book chapters. His research interests include data science, data analytics, and software engineering & bioinformatics.

Srinivasa K G was awarded a Ph.D. in Computer Science and Engineering from Bangalore University in 2007. He has received various awards, including the All India Council for Technical Education – Career Award for Young Teachers; Indian Society of Technical Education – ISGITS National Award for Best Research Work Done by Young Teachers; Institution of Engineers (India) – IEI Young Engineer Award in Computer Engineering; the ISTE’s Rajarambapu Patil National Award for Promising Engineering Teachers in 2012; and a Visiting Scientist Fellowship Award from IMS Singapore. He has published more than 100 research papers in international journals and conferences, and has authored three textbooks: File Structures using C++, Soft Computing for Data Mining Applications and Guide to High Performance Computing. He has also edited research books in the area of cyber-physical systems and energy-aware computing. He has been awarded a BOYSCAST Fellowship by the DST to conduct collaborative research with the Clouds Laboratory at the University of Melbourne. He is the Principal Investigator for several AICTE, UGC, DRDO, and DST funded projects. He is a senior member of IEEE and ACM. His research areas include data mining, machine learning, and cloud computing.