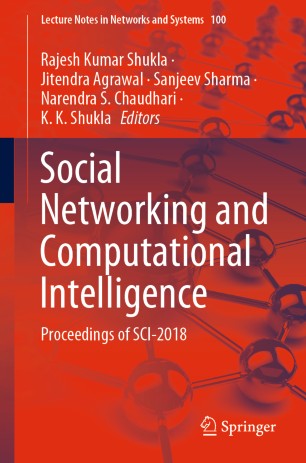 Part of the Lecture Notes in Networks and Systems book series (LNNS, volume 100)

This book presents a selection of revised and extended versions of the best papers from the First International Conference on Social Networking and Computational Intelligence (SCI-2018), held in Bhopal, India, from October 5 to 6, 2018. It discusses recent advances in scientific developments and applications in these areas.

Dr Rajesh K Shukla is the Dean (R&D) and Head of the Department of Computer Science and Engineering, Sagar Institute of Research and Technology, Bhopal. He holds B.E. (CSE), M.Tech. (CSE), and Ph.D. (CSE) degrees, and has served as the Head of Department, Dean, and Vice-Principal of various institutions. He is authored several books, including Analysis and Design of Algorithms (A beginners Approach), Data structure and Files, Basics of Computer Engineering, Data Structure using C and C++, Object Oriented Programming in C++ (all published with Wiley India) and Theory of Computation and Formal Languages and Automata Theory (Published with Cengage Learning). His research interests include recommendation systems, social networking, machine learning, computational intelligence, and data mining, and he has published over 40 papers in international journals and conferences. He has received several awards, including the Chapter Patron Award by the Computer Society of India in 2018, Significant Contribution Award under CSI Service Award by CSI India in 2017, ISTE U.P. Government National Award in 2015, and Bharat Excellence Award in 2015. He has also been active a number of professional societies, and is currently the Chairman of ACM and CSI Bhopal Chapter.
Dr. Jitendra Agrawal works at the Department of Computer Science & Engineering at the Rajiv Gandhi Proudyogiki Vishwavidyalaya, MP, India. He is a teacher, researcher, and consultant in the field of computer science and information technology. His research interests include databases, data structure, data mining, soft computing, and computational intelligence. He has published more than 60 papers in international journals and conferences along with two books entitled “Data Structures” and “Advanced Database Management System”.
Dr. Sanjeev Sharma works as a Professor and the Head of the School of Information Technology at Rajiv Gandhi Proudyogiki Vishwavidyalaya, Bhopal, India, and has received the World Education Congress’s Best Teacher Award in Information Technology. He graduated in Electrical & Electronics from Samrat Ashok Technical Institute, India, and holds a postgraduate quallification in Microwave and Millimeter from Maulana Azad College of Technology, India. He completed his Doctorate in Information Technology at Rajiv Gandhi Proudyogiki Vishwavidyalaya. He has over 29 years’ teaching and research experience and his areas of interest include mobile computing, ad hoc networks, data mining, image processing, and information security. He has edited the proceedings of several national and international conferences and published more than 150 research papers in respected journals.
Dr. Narendra S. Chaudhari is an established researcher in Computer Science and Engineering, and has made significant contributions to engineering education as an institute developer and to professional societies. As a Dean of the Faculty of Engineering Sciences, Devi Ahilya Vishwavidyalaya (DAVV), Indore, from 1995 to 1998, he initiated the Institute of Engineering and Technology, which is now the leading engineering institute in central India. At VNIT Nagpur, he promoted institute-wide research with multi-disciplinary projects, student mentorship programs, and involvement of alumni in entrepreneurship among students. He also founded the innovation center at VNIT Nagpur and led product development that resulted in patents and technology transfer for engineering products. He has also been involved in technical education at national level as: (i) chairman of the Central Regional Committee, AICTE, MHRD, Government of India and (ii) co-convener and secretary of the standing council of NITs, MHRD, Government of India. His research contributions are in the areas of network security and mobile computing, game AI, novel neural network models like binary neural nets and bidirectional nets, context-free grammar parsing, optimization, and graph isomorphism problems.
Dr. Narendra S. Chaudhari was a member of the academic delegation for the Honorable President of India’s state visits to Sweden and Belarus in 2015, and to the People’s Republic of China in 2016. He was also part of FICCI’s higher education delegation to Germany, France, and the Netherlands for in 2015.  He represented VNIT, Nagpur, at the first BRICS-Network University (NU) Conference at Yekaterinburg, Russia.
He has published more than 340 papers in journals and conferences, and completed eight R&D projects, funded by DST, UGC, AICTE, and MHRD. He has been a reviewer for DST and UGC projects and has contributed collaborative research for other pilot projects on computing techniques and industry interaction funded by ST-Engg, DSTA, and A*STAR in Singapore.
Dr. K. K. Shukla is a Professor of Computer Science and Engineering and Dean (Faculty Affairs), Indian Institute of Technology, BHU, Varanasi. He has 35 years of research and teaching experience. Professor Shukla has published more than 160 research papers in leading journals and conferences. He has written 5 books, and contributed chapters to or edited many other books. He holds 24 intellectual property rights in the area of socially relevant computing.