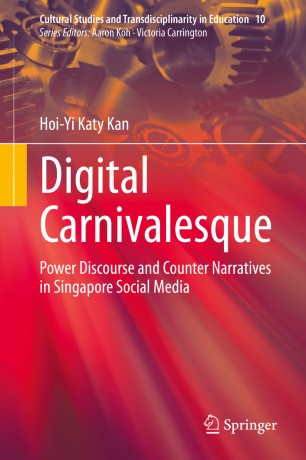 Part of the Cultural Studies and Transdisciplinarity in Education book series (CSTE, volume 10)

This book challenges the framing of comedic acts as apolitical and it adopts a multimodal critical discourse approach to interrogate the performance of comedy as a form of power. It proposes using Bakhtin’s carnivalesque as the analytic tool to distil for readers key differences between humour as banal and humour as critical (and political) in today’s social media.

Drawing from critical theory and cultural studies, this book takes an interdisciplinary approach in formulating a contemporary view of power that reflects social realities not only in the digital economy but also in a world that is increasingly authoritarian. With the proposition of newer theoretical lenses in this book, scholars and social scientists can then find a way to shift the conversation to uncover the evolving voices of (existing and newer) power holders in the shared digital space; and to view current social realities as a continual project in unpacking and understanding the adaptive ways of the human spirit.

This is an important study of the conduct of power relations in Singapore’s social media discourse. Katy Kan weaves together major works by socio-political thinkers to make sense of the way digital discourses in Singapore both enable and challenge social, cultural and political narratives – and considers how this is sagaciously managed by the government.

Theorizing the notion of power in the ever changing and shifting dynamics of the digital realm is always challenging. Katy Kan’s processing of critical theory however presents a powerful lens to unpack power relations in one of the most digitally connected countries in the world – Singapore.