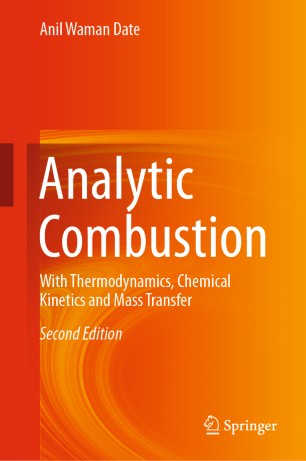 This book is intended to serve as a textbook for advanced undergraduate and graduate students as well as professionals engaged in application of thermo-fluid science to the study of combustion. The relevant thermo-chemistry and thermo-physical data required for this study are provided in the 6 appendices along with appropriate curve-fit coefficients. To facilitate gradual learning, two chapters are devoted to thermodynamics of pure and gaseous mixture substances, followed by one chapter each on chemical equilibrium and chemical kinetics. This material when coupled with a dedicated chapter on understanding of equations governing transport of momentum, heat and mass in the presence of chemical reactions provides adequate grounding to undertake analysis of practical combustion equipment, of premixed and diffusion flames as well as of solid particle and liquid droplet combustion. The learnings from the aforementioned chapters are taken to a uniquely strong chapter on application case studies, some of which have special relevance for developing countries.

Professor Anil W Date obtained PhD degree in Heat Transfer from Imperial College of Science and Technology, London. He joined Indian Institute of Technology, Bombay as Asst Prof and became part of the Thermal & Fluids Group in Mechanical Engineering Department in 1973. Following his superannuation , IIT Bombay has sought continued engagement of Prof Date as the First Rahul Bajaj Chair Professor in Mech Engineering ( 2009-2012), as Emeritus Fellow ( 2010-2013) followed by further re-appointment as Professor (2013-2015) and as Adjunct Professor (2016-2018). In 2006, Professor Date received Excellence in Teaching award and in 2011, received the Life-Time Achievement Award, both from IIT Bombay. In the year 2000, Professor Date was elected Fellow of the Indian National Academy of Engineering (FNAE). Presently, Prof Date is Honorary Professor in the Mech Engg Dept of IIT Bombay. Prof Date’s research interests have been in the ﬁelds of heat and mass transfer with and without phase change and chemical reaction, computational ﬂuid dynamics, appropriate technology and technology-development issues.