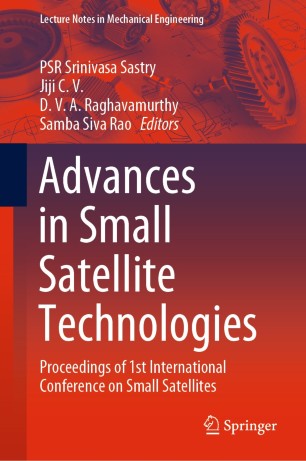 This volume contains select papers presented during the 1st International Conference on Small Satellites, discussing the latest research and developments relating to small satellite technology. The papers cover various issues relating to design and engineering, ranging from the control, mechanical and thermal systems to the sensors, antennas and RF systems used. The volume will be of interest to scientists and engineers working on or utilizing satellite and space technologies.

PSR Srinivasa Sastry is the Project Director for the first LEO Satellite of Defence Research and Development Organization.  In RCI he has worked for the development of hydraulic and electo-mechanical actuation systems for AGNI, A1 to A5 and Interceptor Missiles AD, and designed and developed several electro-hydraulic and electro-mechanical actuators, analog and digital controllers

Jiji CV is a Professor in the Department of Electronics and Communication, College of Engineering Trivandrum (CET), where his research focuses on computer vision, image processing, computational photography and signal processing.He has done his M. Tech and PhD from Indian Institute of Technology Bombay. He is also a visiting researcher in the University of Trento, Italy.

D.V.A Raghavamurthy is a the Director of Aerospace Research in Veltech University. He joined ISRO as a Systems Engineer after his M.Sc.(Tech) from REC Warangal, and worked on numerous satellite projects, including Bhaskara-II, TES, and IRS satellites. He was Project Director of Cartosat-1, IMS-1, YouthSat, SARAL and first Project Director of Chandrayaan 2. He had also been involved in small satellite projects till 2013, when he became the Director of the Earth Observations System in ISRO Head Quarters and was responsible for Earth observing satellites, missions and applications till his retirement in 2016.

V. Sambasiva Rao is a Professor in the Electrical and Communications Engineering Department in PES University and the Director of the Crucible of Research & Innovation (CORI), Bangalore. An engineering graduate from College of Engineering, Kakinada, (Andhra University), he obtained his Ph.D from BITS, Pilani, and was associated with ISRO in various capacities for 37 years, till his retirement as Deputy Director from ISRO Satellite Centre in June 2011. In ISRO he was responsible for the development of high bit rate data transmitters for all IRS series of satellites and various RF and microwave systems in S, C, X, Ku and Ka bands for IRS and INSAT missions, and was also associated with the planning of communication satellites and development of associated technologies.