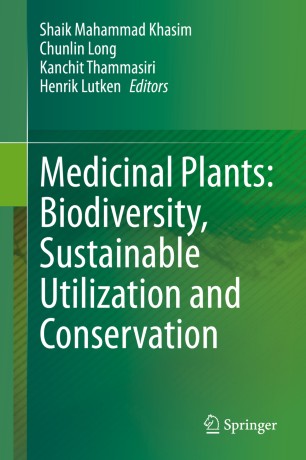 Plants have been a source of medicines and have played crucial role for human health. Despite tremendous advances in the field of synthetic drugs and antibiotics, plants continue to play a vital role in modern as well as traditional medicine across the globe. In even today, one-third of the world’s population depends on traditional medicine because of its safety features and ability to effectively cure diseases. This book presents a comprehensive guide to medicinal plants, their utility, diversity and conversation, as well as biotechnology. It is divided into four main sections, covering all aspects of research in medicinal plants: biodiversity and conservation; ethnobotany and ethnomedicine; bioactive compounds from plants and microbes; and biotechnology. All sections cover the latest advances. The book offers a valuable asset for researchers and graduate students of biotechnology, botany, microbiology and the pharmaceutical sciences. It is an equally important resource for doctors (especially those engaged in Ayurveda and allopathy); the pharmaceutical industry (for drug design and synthesis); and the agricultural sciences.

Professor Shaik Mahammad Khasim (Acharya Nagarjuna University, India) graduated from Andhra University, Visakhapatnam and holds a Post-Graduate degree from Sardar Patel University, Vallabh Vidyanagar, Gujarat. He obtained his Ph.D. in 1987 from Nagarjuna University and specialized in Orchid taxonomy, anatomy and ecology. He made significant contribution in Biodiversity of medicinal plants and Orchid biology, especially molecular characterization, Ethnomedicine and phytochemistry of Angiosperms.He published 60 research papers in National and International journals. He is recipient of Usha Vij Memorial Award 2018 of The Orchid Society of India (TOSI) for his outstanding contribution in Orchid Art and Science, and Associate Fellow of A.P. Academy of Science, India. He is Founder Member of TOSI, Life Member of Indian Science Congress Association (ISCA), Calcutta (India) and Member of the International Society for Horticultural Science (Belgium).

Professor Chunlin Long from Minzu University of China, Beijing, graduated from Hunan Normal University, China and holds Post-Graduate degree from Kunming Institute of Botany, Chinese Academy of Sciences, China. He obtained his Ph.D. in 2002 from Gifu University, Japan. He made significant contribution in fields of agrobiodiversity, ethnobotany and ethnoecology, phytochemistry and natural products and, plant taxonomy and phylogeny. He published 356 papers in national and international journals He is a prolific writer and authored 22 books and 17 patents of innovations in his kit. He established international collaborations with 12 countries. He has been awarded 17 prizes including First-Grade prizes by Yunnan Provincial Government, Chinese Academy of Sciences, and Society of Ethnobotanists. He is also the Vice-President of Chinese Society of Ethnobotany and Vice-Chair of Ethnoecology, Ecological Society of China.

Dr. K. Thammasiri (Mahidol University, Bangkok, Thailand) graduated in Agriculture from Kasetsart University, Bangkok and holds Post-Graduation in Agriculture from the same university.  He made significant contribution in the fields of Cryopreservation, breeding and tissue culture of orchids and plant genetic resources & conservation. His current research involves Oorchid breeding and micropropagation of selected genera, such as cattleya alliance, dendrobiums, phalaenopsis and vandaceous-type orchids and cryopreservation of Thai orchid species. Presently he is holding the position of Associate Professor, Department of Plant Science, Faculty of Science, Mahidol University, Bangkok, Thailand.

Dr. Henrik Lütken (University of Copenhagen, Denmark) Post-Graduated from University of Copenhagen, Denmark. He obtained his Ph.D. in 2007 from the same university. He has during his PhD and PostDoc conducted studies abroad in Germany (Max-Planck Institute, Golm), South Africa (University of Stellenbosch) and Norway (Bioforsk, Aas). He made significant contribution in the field of Genetic engineering, Molecular biology of Ornamental plants, Tissue culture and biotransformation. He published 45 research papers in International journals His outstanding contribution on Agrobacterium rhizogenes got patented in 2016 with United States Patent Trademark Office. He has been the Coordinator of the Crop Science Section Lab-Unit since 2012 and also the Coordinator of DFFResearch Project 1 and also Knowledge Voucher funded by Government of Denmark. He actively participated in Workshop in ‘Protected Skills of Competitive Project Proposal’, Helsinki, Finland and ‘Work Environment Course for Leaders’, Denmark.