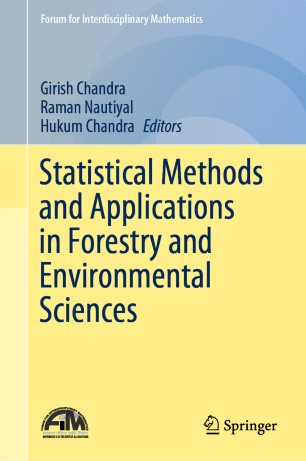 Statistical Methods and Applications in Forestry and Environmental Sciences

Part of the Forum for Interdisciplinary Mathematics book series (FFIM)

The book is a valuable resource for applied statisticians, students, researchers, and practitioners in the forestry and environment sector. It includes real-world examples and case studies to help readers apply the techniques discussed. It also motivates academicians and researchers to use new technologies in the areas of forestry and environmental sciences with the help of software like R, MATLAB, Statistica, and Mathematica.

GIRISH CHANDRA, PhD, is a scientist at the Division of Forestry Statistics, Indian Council of Forestry Research and Education (ICFRE), Dehradun, India. He previously worked at the Tropical Forest Research Institute, Jabalpur, and Central Agricultural University, Sikkim. He has published over 25 research papers in various respected journals and one book. He was awarded the Cochran–Hansen Prize 2017 by the International Association of Survey Statisticians, the Netherlands. He is also a recipient of the ICFRE Outstanding Research Award 2018 and Young Scientist Award in Mathematical Sciences from the Government of Uttarakhand. He has presented his research papers at various international conferences and workshops in India and abroad. He has organised two national conferences and is a member of various scientific institutions, including the International Statistical Institute, International Indian Statistical Association, Computational and Methodological Statistics, and the Indian Society for Probability and Statistics. His research interests include sample surveys, probability theory and numerical methods.
RAMAN NAUTIYAL is head of the Division of Forestry Statistics, ICFRE. He previously worked as a scientist at the Institute of Forest Genetic and Tree Breeding, Coimbatore. He has handled projects on forestry statistics funded by International Tropical Timber Organization, Japan, Central Statistical Office, NOVOD Board, and the Ministry of Environment, Forest and Climate Change, Government of India.
HUKUM CHANDRA is an ICAR National Fellow at the ICAR-Indian Agricultural Statistics Research Institute, New Delhi, India. He holds a PhD from the University of Southampton, United Kingdom, and completed his postdoctoral research at the University of Wollongong, Australia. His main research areas include sample survey design and analysis, small area estimation, bootstrap methods, statistical modelling and data analysis, and statistical methodology for the improvement of agricultural statistics. He has received numerous awards and recognition for his research contributions, including the National Award in Statistics from the Ministry of Statistics and Programme Implementation, Government of India; Cochran–Hansen Award from the International Association of Survey Statisticians; Young Researcher/Student Award from the American Statistical Association; Lal Bahadur Shastri Outstanding Young Scientist Award from ICAR; Recognition Award from the National Academy of Agricultural Sciences; Professor P.V. Sukhatme Gold Medal Award; and Dr. D.N. Lal Memorial Award from the Indian Society of Agricultural Statistics. He also received a scholarship from the Commonwealth Scholarship Commission in the United Kingdom.
A council member of the International Association of Survey Statisticians, Dr Chandra has worked as an expert member of various committees at a number of institutions and ministries in India. As an international consultant for the FAO, he has worked in Sri Lanka, Ethiopia and Myanmar. He is an elected member of the International Statistical Institute and Fellow of the National Academy of Agricultural Sciences, India. He has published more than 100 journal papers, three books, and several technical bulletins, project reports, book chapters, working papers, and training and teaching manuals.