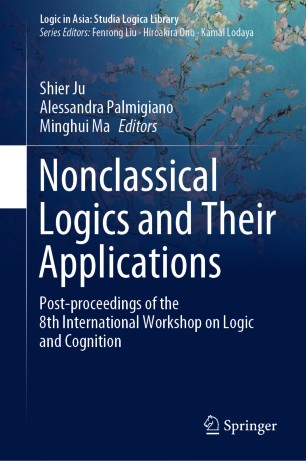 Nonclassical Logics and Their Applications

Post-proceedings of the 8th International Workshop on Logic and Cognition

This edited book focuses on non-classical logics and their applications, highlighting the rapid advances and the new perspectives that are emerging in this area. Non-classical logics are logical formalisms that violate or go beyond classical logic laws, and their specific features make them particularly suited to describing and reason about aspects of social interaction. The richness and diversity of non-classical logics mean that this area is a natural catalyst for ideas and insights from many different fields, from information theory to game theory and business science.
This volume is the post-proceedings of the 8th International Conference on Logic and Cognition, held at Sun Yat-Sen University Institute of Logic and Cognition (ILC) in Guangzhou, China in December 2016. The conference series started in 2001, and is organized by the ILC, often in collaboration with various international research groups. This eighth installment was jointly organized by ILC and Alessandra Palmigiano's Applied Logic research group. The conference series aims to foster the development of effective logical tools to study social behavior from a philosophical, cognitive and formal perspective in order to challenge the field of logic in ways that open up new and exciting research directions.
Chapter "The Category of Node-and-Choice Forms, with Subcategories for Choice-Sequence Forms and Choice-Set Forms" of this book is available open access under a CC BY 4.0 license at link.springer.com

Shier Ju is the director of the Institute of Logic and Cognition at the Sun Yat-Sen University (Guangzhou, China). Dr. Shier Ju focuses on the cross-discipline development of logic in connection with culture, argumentation, social interaction, language and computation.
Alessandra Palmigiano holds the Chair of Logic and Management Theory at the School of Business and Economics of the Vrije Universiteit Amsterdam. The logics for social behaviour are the main focus of her research.
Minghui Ma is a Professor in logic at the Institute of Logic and Cognition, Sun Yat-Sen University (Guangzhou, China). Dr. Minghui Ma focuses on the combination of proof theory, model theory and universal algebra for non-classical logics.