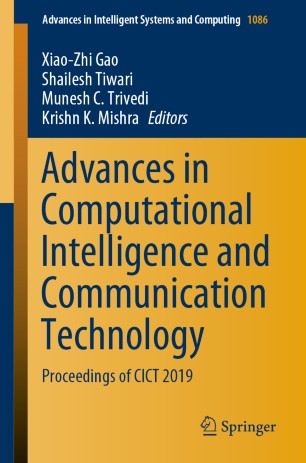 Part of the Advances in Intelligent Systems and Computing book series (AISC, volume 1086)

This book features high-quality papers presented at the International Conference on Computational Intelligence and Communication Technology (CICT 2019) organized by ABES Engineering College, Ghaziabad, India, and held from February 22 to 23, 2019. It includes the latest advances and research findings in fields of computational science and communication such as communication & networking, web & informatics, hardware and software designs, distributed & parallel processing, advanced software engineering, advanced database management systems and bioinformatics. As such, it is of interest to research scholars, students, and engineers around the globe.

Prof. Xiao-Zhi Gao received his B.Sc. and M.Sc. degrees from the Harbin Institute of Technology, China, in 1993 and 1996, respectively. He obtained his D.Sc. (Tech.) degree from the Helsinki University of Technology (now Aalto University), Finland, in 1999. He has been working as a Professor at the University of Eastern Finland, Finland, since 2018. He is also a Guest Professor at the Harbin Institute of Technology, Beijing Normal University, and Shanghai Maritime University, China. Prof. Gao has published more than 400 technical papers on refereed journals and international conferences, and his current Google Scholar H-index is 30. His research interests are nature-inspired computing methods with their applications in optimization, data mining, machine learning, control, signal processing, and industrial electronics.

Prof. Shailesh Tiwari currently working as a Professor in Computer Science and Engineering Department, ABES Engineering College, Ghaziabad, India. He is an alumnus of Motilal Nehru National Institute of Technology Allahabad, India. His primary areas of research are software testing, implementation of optimization algorithms, and machine learning techniques in various problems. He has published more than 50 publications in international journals and in proceedings of international conferences of repute. He is editing Scopus, SCI, and E-SCI-indexed journals. He has organized several international conferences under the banner of IEEE and Springer. He is a senior member of IEEE, member of IEEE Computer Society, and Fellow of Institution of Engineers (FIE).

Dr. Munesh Chandra Trivedi currently working as an Associate Professor in the Department of CSE, NIT Agartala, Tripura, India. He has published 20 textbooks and 80 research publications in different international journals and proceedings of international conferences of repute. He has received Young Scientist and numerous awards from different national as well as international forums. He has organized several international conferences technically sponsored by IEEE, ACM, and Springer. He is on the review panel of IEEE Computer Society, International Journal of Network Security, Pattern Recognition Letter, and Computer & Education (Elsevier’s Journal). He is an executive committee member of IEEE India Council and IEEE Asia Pacific Region 10.

Dr. Krishn Kumar Mishra is currently working as Assistant Professor, Department of Computer Science and Engineering, Motilal Nehru National Institute of Technology Allahabad, India. He has also been worked as Visiting Faculty in the Department of Mathematics and Computer Science, University of Missouri, St. Louis, USA. His primary areas of research include evolutionary algorithms, optimization techniques and design, and analysis of algorithms. He has also published more than 50 publications in international journals and in proceedings of internal conferences of repute. He is serving as a program committee member of several conferences and also edited Scopus and SCI-indexed journals. He is also a member of reviewer board of Applied Intelligence Journal, Springer.