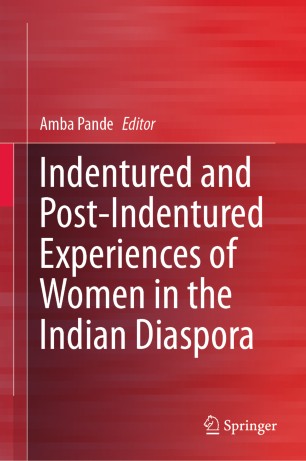 Indentured and Post-Indentured Experiences of Women in the Indian Diaspora

This book describes the processes of migration and settlement of indentured Indian women and tries to map their struggles, challenges and agencies. It highlights the fact that even though indentured women faced various kinds of violence and abuse owing to the authoritarian and patriarchal setup of the plantations, over a period of time, they managed to turn the adverse circumstances to their advantage. They struggled to emerge as productive workforces and empowered themselves through acquiring education and skill, and negotiating new spaces and identities for themselves. At the same time, they also raised families in often inhospitable circumstances, passing on to their descendants, a strong foundation to build successful lives for themselves.
The book discusses indentured women from a multidisciplinary perspective and adopts multiple methodologies, including primary and secondary sources, personal narrations, pictorial representations and theoretical discussions. It also provides an overview of the current discourses and the changing paradigms of the studies on Indian indentured women. Further, it presents a detailed, region-wise description of indentured women migrants. The regions covered in this book are Asia- Pacific (countries covered are Fiji, Burma and Nepal); Africa (countries covered are South Africa, Mauritius and Reunion Island); and the Caribbean (countries covered are Suriname, Trinidad and Tobago). In addition, one full section of the book is devoted to the theoretical frameworks that touch upon gender performativity, normative misogyny, Bahadur's Coolie Women, literary representations and resistance movements.
It is intended for academics and researches in the field of diaspora/migration/transnational studies, history, sociology, literature, women/gender studies, as well as policymakers and general readers interested in the personal experiences of women and migrants.

Dr Amba Pande is associated with the School of International Studies, Jawaharlal Nehru University. She received her PhD from the Centre for Southeast Asia and South-West Pacific Studies, School of International Studies, JNU, New Delhi. Her research interests include Indian diaspora, international migration and the Indo-Pacific region. She was also a visiting scholar at the University of Amsterdam (The Netherlands), University of South Pacific (Fiji), and Otago University (New Zealand). She has done major projects on Indian diaspora with University Grants Commission (UGC) and Indian Council of Social Science Research (ICSSR) funding. Dr Pande is a prolific writer and has published numerous papers in national and international journals. She has edited two more volumes on Diasporic Women Women in the Indian Diaspora: Historical Narratives and Contemporary Challenges  (Springer 2018), Women, Gender and the Legacy of Slavery and Indenture (co-editor, forthcoming). Dr Pande has been invited to give independent lectures, present papers, and participate in and chair several national and international seminars and conferences. She is currently carrying out research on Indians in Myanmar and Fiji.