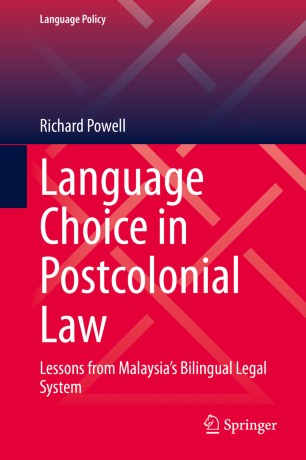 This book discusses multilingual postcolonial common law, focusing on Malaysia’s efforts to shift the language of law from English to Malay, and weighing the pros and cons of planned language shift as a solution to language-based disadvantage before the law in jurisdictions where the majority of citizens lack proficiency in the traditional legal medium. Through analysis of legislation and policy documents, interviews with lawyers, law students and law lecturers, and observations of court proceedings and law lectures, the book reflects on what is entailed in changing the language of the law. It reviews the implications of societal bilingualism for postcolonial justice systems, and raises an important question for language planners to consider: if the language of the law is changed, what else about the law changes?

Richard POWELL is a Professor (English/International Course/Language & Human Rights) in the Department of Economics at Nihon University, Japan. His research interests include forensic linguistics, legal English, language planning and cross-cultural pragmatics and he conducts research in East Africa, South Asia, East Asia, and Southeast Asia. Coming to the field of language and law from a background in history (Cambridge), politics (SOAS, London), law (College of Law, London) and applied linguistics (Macquarie, Sydney), he holds a PhD in Sociolinguistics and Legal Education from Melbourne University. He is particularly interested in the macro-level decisions that influence conscious and subconscious individual choices in law and education. He is on the board of directors of Japan's Law and Language Association and sits on the advisory committee of a number of publications, including the International Journal of the Semiotics of Law and Law and Visual Jurisprudence. He is the book reviews editor of the International Journal of Speech, Language and the Law.