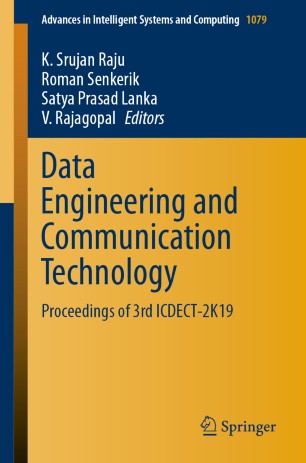 Part of the Advances in Intelligent Systems and Computing book series (AISC, volume 1079)

This book includes selected papers presented at the 3rd International Conference on Data Engineering and Communication Technology (ICDECT 2019), held at Stanley College of Engineering and Technology for Women, Hyderabad, from 15 to 16 March 2019. It features advanced, multidisciplinary research towards the design of smart computing, information systems, and electronic systems. It also focuses on various innovation paradigms in system knowledge, intelligence, and sustainability which can be applied to provide viable solutions to diverse problems related to society, the environment, and industry.

Dr. K. Srujan Raju is the Professor and Head, Department of CSE, CMR Technical Campus, Hyderabad, India. Prof. Raju earned his PhD in the field of network security and his current research includes computer networks, information security, data mining, image processing, intrusion detection and cognitive radio networks. He has published several papers in refereed international conferences and peer reviewed journals and also he was in the editorial board of CSI 2014 Springer AISC series; 337 and 338 volumes, IC3T 2014, IC3T 2015, IC3T 2016, ICCII 2016 & ICCII 2017 conferences. In addition to this, he has served as reviewer for many indexed National and International journals. Prof. Raju is also awarded with Significant Contributor, Active Young Member Awards by Computer Society of India (CSI). Prof. Raju also authored 4 Text Books and filed 7 Patents so far.
Dr. Roman Senkerik is a Researcher/Lecturer of Applied Informatics and Lectures on the fundamentals of theoretical informatics, theory of algorithms and cryptology. Seminars and laboratories in courses of Applied Informatics, Methods of Artificial Intelligence, Cryptology, Mathematical Informatics, Theory of Algorithms, Fundamentals of Computer Science. Supervision of Bachelors and Masters theses and consultations for Ph.D. students. His research in the field of artificial intelligence, optimization, chaos theory, soft computing and evolutionary techniques. Presently working as professor, Department of Applied Informatics, Tomas Bata University, Czech Republic.
Dr. Satya Prasad Lanka is currently working as Principal in Stanley College of Engineering and Technology for Women, Hyderabad, India and he is serving as a professor in Electronics and Communication Engineering department. He received his Ph.D degree in Image Processing from JNTUK, Kakinada and Master degree in Electronics and Communication Engineering from IT, BHU, Varanasi. He obtained his Bachelor degree from Bangalore University, Karnataka. He has more than 31 years of teaching and research experience. He has published several papers in International conferences and journals. He has guided more than 35 projects. His area of interest are Digital Signal Processing, VLSI design, Digital Image Processing, Pattern Recognition and Communications. He is a member of ISTE and Fellow of Institution of Engineers and Institution of Electronics and Telecommunication Engineers.
Dr. V. Rajagopal received his bachelor’s degree in Electrical Engineering in the year 1999 from The Institution of Engineers (India). He completed his M.Tech Degree in Power Electronics and Drives from Uttar Pradesh Technical University in the year 2004. He pursued his Ph.D degree in Power Electronics from I.I.T. Delhi in the year 2012.  He worked in various educational institutions and also worked as a NBA, NAAC and Autonomous coordinator. He is trained on Jaguar Aircraft, Jaguar Simulator and worked for up-gradation of Jaguar Simulator with French Delegation of Thales while serving in Indian Air Force. His has rich teaching, research and industry experience of 27 years. He has published over 12 International Journals, 06 National Journals, 27 International and 6 National Conferences, and 01 Indian Patent filed. He coordinated Symposium and workshops. He is a reviewer of various International Journals like IEEE, IET and Taylor and Francis. He is a life member of ISTE and Fellow of Institution of Engineers (India). Currently he is guiding 04 Ph.D. Research Scholars and given 20 lectures in various institutions all over India. Currently he is working as a Professor and Head of EEE Department at Stanley College of Engineering and Technology for Women in Hyderabad.