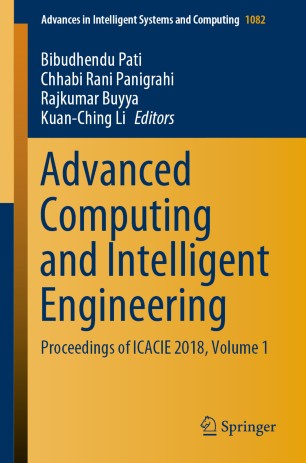 Part of the Advances in Intelligent Systems and Computing book series (AISC, volume 1082)

This book gathers high-quality research papers presented at the 3rd International Conference on Advanced Computing and Intelligent Engineering (ICACIE 2018). It includes sections describing technical advances and the latest research in the fields of computing and intelligent engineering. Intended for graduate students and researchers working in the disciplines of computer science and engineering, the proceedings will also appeal to researchers in the field of electronics, as they cover hardware technologies and future communication technologies.

Dr. Bibudhendu Pati is an Associate Professor and the Head of the Department of Computer Science at Rama Devi Women’s University, Bhubaneswar, India. He received his Ph.D. degree from IIT Kharagpur. Dr. Pati has 21 years of experience in teaching, research, and industry. His areas of research include wireless sensor networks, cloud computing, big data, Internet of Things, and networks virtualization. He is a life member of the Indian Society of Technical Education (ISTE), a senior member of IEEE, member of ACM, and life member of the Computer Society of India (CSI). He has published several papers in leading international journals, conference proceedings and books. He is involved in organizing various international conferences.

Dr. Chhabi Rani Panigrahi is an Assistant Professor at the Department of Computer Science at the Rama Devi Women’s University, Bhubaneswar, India. She holds a doctoral degree from the Indian Institute of Technology Kharagpur. Her research interests include software testing and mobile cloud computing. She has more than 18 years of teaching and research experience, and has published numerous articles in leading international journals and conferences. Dr. Panigrahi is the author of a number of books, including a textbook and. She is a life member of the Indian Society of Technical Education (ISTE) and a member of IEEE and the Computer Society of India (CSI).

Dr. Rajkumar Buyya is a Redmond Barry Distinguished Professor of Computer Science and Software Engineering and Director of the Cloud Computing and Distributed Systems (CLOUDS) Laboratory at the University of Melbourne, Australia. He is also serving as the founding CEO of Manjrasoft, a spin-off company of the university, commercializing its innovations in cloud computing. He served as a future fellow of the Australian Research Council during 2012–2016. He has authored over 525 publications and seven textbooks including “Mastering Cloud Computing” published by McGraw Hill, China Machine Press, and Morgan Kaufmann for Indian, Chinese, and international markets, respectively. He has also edited several books including “Cloud Computing: Principles and Paradigms” (Wiley Press, USA, Feb 2011). He is one of the highly cited authors in computer science and software engineering worldwide (h-index=112, g-index=245, 63,900+ citations). Microsoft Academic Search Index ranked Dr. Buyya as #1 author in the world (2005–2016) for both ﬁeld rating and citation evaluations in the area of Distributed and Parallel Computing. Recently, Dr. Buyya is recognized as “2016 Web of Science Highly Cited Researcher” by Thomson Reuters.

Prof. Kuan-Ching Li is a Professor in the Department of Computer Science and Information Engineering at the Providence University, Taiwan. He has been the vice-dean for the Office of International and Cross-Strait Affairs (OIA) at the same university since 2014. Prof. Li is the recipient of awards from Nvidia, the Ministry of Education (MOE)/Taiwan and the Ministry of Science and Technology (MOST)/Taiwan, and also guest professorship from various universities in China. He received his Ph.D. from the University of Sao Paulo, Brazil, in 2001. His areas of research include networked and graphics processing unit (GPU) computing, parallel software design, and performance evaluation and benchmarking. He has edited two books: Cloud Computing and Digital Media and Big Data published by CRC Press. He is a fellow of the IET, senior member of the IEEE, and a member of TACC.