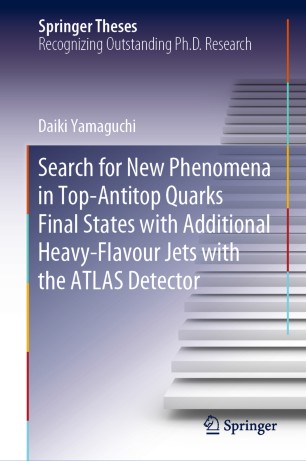 This book reports on the search for a new heavy particle, the Vector-Like Top quark (VLT), in the Large Hadron Collider (LHC) at CERN. The signal process is the pair production of VLT decaying into a Higgs boson and top quark (TT→Ht+X, X=Ht, Wb, Zt). The signal events result in top–antitop quarks final states with additional heavy flavour jets.

The book summarises the analysis of the data collected with the ATLAS detector in 2015 and 2016. In order to better differentiate between signals and backgrounds, exclusive taggers of top quark and Higgs boson were developed and optimised for VLT signals. These efforts improved the sensitivity by roughly 30%, compared to the previous analysis. The analysis outcomes yield the strongest constraints on parameter space in various BSM theoretical models.

In addition, the book addresses detector operation and the evaluation of tracking performance. These efforts are essential to properly collecting dense events and improving the accuracy of the reconstructed objects that are used for particle identification. As such, they represent a valuable contribution to data analysis in extremely dense environments.